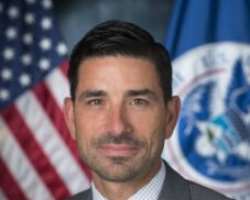 Chad Wolf has had his nomination for Homeland Security chief pulled by the White House, after which he publicly criticised President Doanld Trump over violent riots that took place in the Capitol on Wednesday.

Wolf, who remains in the role as acting DHS chief and whose nomination would not have been confirmed by the Senate given the incoming administration, criticised the rioting and suggested Mr Trump should have taken further action, but did not resign unlike many of his colleagues.

“What transpired yesterday was tragic and sickening. While I have consistently condemned political violence on both sides of the aisle, specifically violence directed at law enforcement, we now see some supporters of the president using violence as a means to achieve political ends. This is unacceptable. These violent actions are unconscionable, and I implore the president and all elected officials to strongly condemn the violence that took place yesterday,” Wolf said in a statement.

“Every American is guaranteed the right to peacefully protest, but once those protests become violent, we should enforce our laws and bring those responsible to justice — regardless of political motivations.”

He added: “I will remain in my position until the end of the administration to ensure the department's focus remains on the serious threats facing our country and an orderly transition to President-elect Biden's DHS team.”