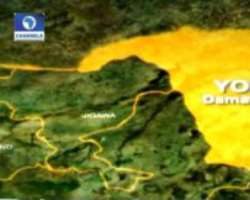 Sources told Channels Television that the members of the community earlier had the rumour of the attack at 1 pm in which most of them fled their homes to the bush for safety.

However, the insurgents succeeded in attacking the community at 5 pm this evening.

A resident of the area, Idris Garba, said that although fighter jets have arrived, the suspected insurgents were still inside the town shooting sporadically.

When contacted to comment on the attack, the spokesman of Sector 2, Operation Lafiya Dole, Lieutenant Kennedy Anyanwu, didn't pick up nor reply to the text message sent to him.(Channels TV)