'Let's get back to work': A rattled Congress continues Electoral College count after pro-Trump riot at Capitol 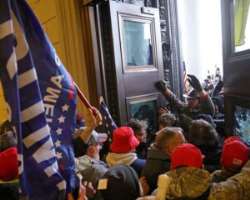 Congress restarted the Electoral College count on Wednesday evening after rioters violently stormed the Capitol and brought the proceedings to a standstill and the building under siege.

With lawmakers’ nerves rattled by the day’s events and their passions inflamed by the attack on the seat of U.S. government, the Senate resoundingly rejected the first GOP objection to finalizing President-elect Joe Biden’s victory. By a vote of 93 to 6, the chamber defeated the effort to exclude Arizona’s election results from Biden’s tally.

The vote came after more than an hour of intense debate over the strength of American democracy – and after many hours of chaos at the Capitol, during which lawmakers were sequestered in secure locations while police tried to regain control of the building.

In the wake of the attack, several Republicans dropped their plans to object to Biden’s victory, saying the violence made them reconsider.

“The violence, the lawlessness and siege of the halls of Congress are abhorrent and stand as a direct attack on the very institution my objection was intended to protect: the sanctity of the American democratic process,” said Sen. Kelly Loeffler, the Georgia Republican who lost her runoff election on Tuesday to Democrat Raphael Warnock and had planned to object to at least one vote.

But others pressed ahead with what their colleagues described as a dangerous gambit that would only serve to undermine Americans’ confidence in the electoral system and fuel President Donald Trump’s false claims that the election was fraudulent – an assertion that has been repeatedly debunked and rejected by courts, election officials and state leaders.

The six Republican senators who supported the Arizona objection were Sens. Ted Cruz of Texas, Josh Hawley of Missouri, Cindy Hyde-Smith of Mississippi, John Kennedy of Louisiana, Roger Marshall of Kansas and Tommy Tuberville of Alabama.

“I rise in hopes of improving the integrity of the ballot,” said Marshall, who was sworn in for his first term earlier this week. He provided no evidence of fraud and no reason the state's results should be rejected.

Other Republicans slammed the objections and said Wednesday’s violence and riots showed the danger of such tactics.

“We gather due to a selfish man's injured pride, and the outrage of supporters who he has deliberately misinformed for the past two months,” said Sen. Mitt Romney, R-Utah.

Romney called the attack on the Capitol “an insurrection incited by the president” and said those supporting Trump’s false claims would be judged harshly.

“Those who choose to continue to support his dangerous gambit by objecting to the results of a legitimate democratic election will forever be seen as being complicit in an unprecedented attack against our democracy,” he said. “That will be their legacy.”

Lawmakers in both parties appeared intent of completing the Electoral College count by Wednesday night or early Thursday morning. And there was bipartisan condemnation for the rioters who disrupted the proceedings Wednesday afternoon.

“Today was a dark day in the history of the United States Capitol,” Vice President Mike Pence, the president of the Senate, said as he resumed the session just after 8 p.m. ET. “We condemn the violence that took place here in the strongest possible terms. We grieve the loss of life in these hallowed halls as well as those injured in our Capitol today.”

“To those who wreaked havoc in our Capitol today: You did not win.”

Pence ended his comments saying, “Let’s get back to work.”

House Speaker Nancy Pelosi reconvened the House about an hour later, promising, “Our purpose will be accomplished.”

“We must and will show to the country, and indeed to the world, that we will not be diverted from our duty, that we will respect our responsibilities to the Constitution and to the American people.”

“To those who strove to deter us from our responsibility, you have failed,” Pelosi said. “To those who engaged in the gleeful discretion in this — our temple of democracy, American democracy — justice will be done.”

Even as lawmakers gathered in the House and Senate's stately chambers, a phalanx of law enforcement officials from multiple agencies — some in tactical gear and carrying automatic weapons — were stationed outside and scattered across the Capitol. They continued working to disperse the crowd outside who had gathered at the behest of Trump.

“They tried to disrupt our democracy,” Senate Majority Leader Mitch McConnell said. “They failed. They failed. This failed insurrection only underscores how crucial the task before us is for our republic.”

Sen. Chuck Schumer, the top Democrat in the chamber, said the day would “live forever in infamy” along with other watershed events.

“This will be a stain on our country, not so easily washed away,” Schumer said. He called the attack on the Capitol “the final terrible, indelible legacy of the 45th president of the United States, undoubtedly our worst.”

He said the riot at the Capitol “did not happen spontaneously” but at the instigation of President Donald Trump.

“This temple to democracy was desecrated, it's windows smashed our offices vandalized,” said Schumer. He said Trump “bears a great deal of the blame” for the violence.

“This mob was in good part President Trump’s doing, incited by his words, his lies. This violence in good part is his responsibility, his everlasting shame. Today’s events certainly would not have happened without him.”

As the debate got underway, it became clear the attack had altered itstenor and trajectory.

“I cannot now in good conscience object to the certification of these voters,” said Loeffler.

In the House, another Republican said she would drop her objections after the attack on the Capitol.

“I have decided I will vote to uphold the Electoral College results and I encourage Donald Trump to condemn and put an end to this madness,” said Rep. Cathy McMorris Rodgers, R-Wash. “What happened today and continues to unfold in the nation's capital is disgraceful and un-American.”

When the rioters breached the Capitol, lawmakers were in the middle of debating an objection to Arizona’s vote count. Hawley and others signaled they were going to object to at least two additional states; each objection to a state’s count triggers a two-hour debate and a vote.

A citywide curfew went into effect in Washington, D.C., at 6 p.m ET. Officers from multiple law enforcement agencies are outside on the Capitol complex, but only 13 arrests have been made.

Federal law requires a joint session of Congress meet on Jan. 6 at 1 p.m. after every presidential election to count the Electoral College votes submitted by states. But the law does not contemplate a delay in proceedings. Biden and Vice President-elect Kamala Harris will be sworn in on Jan. 20.

Even before the violence at the capitol building, the session was shaping up to be a marathon with Republican lawmakers objecting to electoral votes from perhaps six or more states.