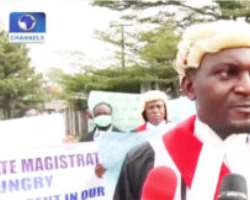 No fewer than 30 Cross River State magistrates have protested against non-payment of their 24 months salaries at the governor's office in Calabar.

Chief Magistrate, Court of Odukpani, Safiya Ashipu, who protested along with her two sons and 29 other magistrates on Tuesday carried placards bearing different inscriptions.

The magistrates, including 11 from Obudu, where Governor Ben Ayade hails from, were drawn from the 18 council areas of the state.

Speaking to journalists, the Chief Magistrate of Cross River Govt, Solomon Abuo lamented that the state government is yet to pay them their salaries.

He explained that the protest became imperative over what he described as a failed dialogue while engaging with the relevant arms of government.

“As we speak, we are all sitting magistrates manning different courts in the state, dispensing justice for the peace and tranquillity of our state, Cross River,” he said.

“We kept on waiting for the state government to pay us our salary and some persons will be asking why are we protesting now?

“We decided not to protest all this while in order to give peace a chance by dialoguing with the government. Dialogue has failed.

“We have written to the executive arm of government through the Secretary to the State Government, the Attorney General of the state.

“We have written to the legislative arm of government through the Speaker, Cross River State House of Assembly on this matter, up till now no salaries.”(Channels TV)