There is no increase in electricity tariffs, says Keyamo 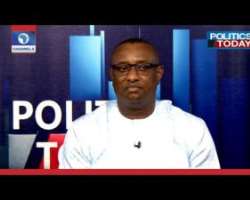 The Minister of State for Labour and Employment, Festus Keyamo, says there has been no increase in electricity tariffs following an adjustment by the Nigerian Electricity Regulatory Commission (NERC).

Speaking on Channels Television's Politics Today on Tuesday, the Minister explained that what was done was to adjust certain bands and to ensure that certain persons who are supposed to be on some bands, are not wrongly put on some other bands.

“What we agreed to do was to freeze certain bands (we have band A,B,C,D). In the interim, what we did was to adjust certain bands and to ensure that certain persons who were supposed to be on some bands, are not wrongly put on some other bands but there has not been any increase in tariffs,” he said.

This is contrary to a statement by NERC issued earlier on Tuesday admitting that the rates for service bands A, B, C, D, and E have been “adjusted” by N2 to N4 per kilowatt-hour (KWH).

According to the agency, the adjustment is in compliance with the provisions of the Electric Power Sector Reform (ESPR) Act and Nigeria's tariff methodology for biannual minor review.

It also noted that it was aimed at reflecting the partial impact of inflation and movement in forex.

But Keyamo who is the chairman of the sub-committee mandated to go round the country to interact with stakeholders and the discos to find a cost-effective tariff that Nigerians can pay, maintained that there has been no increase in tariff.

“We are still in the process of carrying out our assignment, we have not finished and when I saw the story this morning, I consulted members of the team and they said it is not correct. There has been no increase in tariff,” he said on Tuesday.

Meanwhile, the Trade Union Congress of Nigeria on Tuesday said it is disappointed by the recent hike in electricity tariffs approved by the Nigerian Electricity Regulatory Commission.

According to a statement signed by TUC President, Comrade Quadri A. Olaleye, the hike was effected despite negotiations still ongoing with organised labour over the last increase that became effective from November 1. (Channels TV)