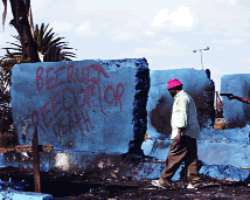 Organizers of the annual Durban International Film Festival (DIFF), recently announced that its 31st edition will open with the world premiere of the South African film, State Of Violence, directed by Khalo Matabane. The festival runs from July 22 to August 1, amid glitz and razzmatazz.

Matabane, the winner of the Best South African Film award at DIFF in 2006, for Conversations On A Sunday Afternoon, returns to the festival with this story of a man whose wife is murdered in what seems like a random act of violence. He embarks on a search for the killer, only to discover that the killing is linked to the darkness in his past. State Of Violence stars Fana Mokoena, Presley Chweneyagae and Neo Ntlatleng and is produced by DV8 Films.

Matabane said: “State Of Violence is a film about memory and denial. A successful man experiences a tragic event which forces him to go on a journey into a landscape that represents his past. Once there, he is confronted with a memory that he has buried, and incident that tore apart his family.”
Continuing, he said: “My relationship with DIFF goes back several years when I screened Conversations On A Sunday Afternoon there and I have since served on the International Jury of the festival, and given talks on filmmaking, so the festival is a perfect home to launch the film.”

Peter Rorvik, Director of the Durban International Film Festival, commented thus: “The festival is committed to the promotion of South African cinema, and we are proud to open our 31st edition with State Of Violence, a powerful, brave and thrilling film by a very talented director.”

Nathan continued: “The film explores the consequences of violence on contemporary South African life. Through the eyes and point of view of the lead character, Bobedi, the film reveals how acts of violence in the past can affect family life today. It asks more questions than provides answers, but reveals how complex the issues of forgiveness and revenge are in any society with a violent political past.

The National Film and Video Foundation's Head: Production and Development, Clarence Hamilton, said: “The NFVF is very pleased with the news of Khalo Matabane's State Of Violence being invited to open the Durban International Film Festival. It is gratifying to finally have arrived at this moment after a three year development of a story that seeks to explore what it will take for South Africans to end the violence that has become so endemic in our post-apartheid world.”

The NFVF is a principal supporter of the Durban International Film Festival and is a funder of State Of Violence. The NFVF and DV8 have a slate deal which has resulted in, among others, Shirley Adams, Izulu Lami and now State Of Violence. The Durban International Film Festival's complete programme will be released in early July. For more information visit www.cca.ukzn.ac.za

The festival is organized by the Centre for Creative Arts (University Of KwaZulu-Natal) with principal support by the National Film and Video Foundation, KwaZulu-Natal Department of Economic Development and Tourism, HIVOS, City of Durban, German Embassy, Goethe Institut, Industrial Development Corporation, Commonwealth Foundation and a range of other valued partners.