Trump should be impeached, again, over efforts to tamper with Georgia election: Watchdog group 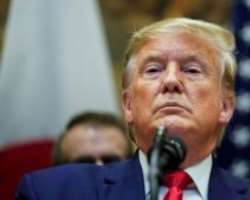 President Donald Trump should be impeached for a second time after being “caught on tape trying to rig a presidential election,” the watchdog group Citizens for Responsibility and Ethics in Washington said Sunday.

The demand comes after the release of a recording that features Trump pleading with Georgia elections official Brad Raffensperger to “find” more votes for him so that he could claim victory in a state that he lost by nearly 13,000 votes.

“There’s nothing wrong with saying… that you’ve recalculated,” Trump said on the Saturday call.

CREW, a self-styled crusader against “government officials who sacrifice the common good to special interests,” said that is cause enough to remove Trump from office before President-elect Joe Biden’s inauguration on January 20.

“While the logistics of holding impeachment proceedings in the final two weeks of a presidency are admittedly hard to pull off, if this isn’t impeachable conduct, then literally nothing is,” CREW Executive Director Noah Bookbinder said in a statement. “Congress must act immediately.”