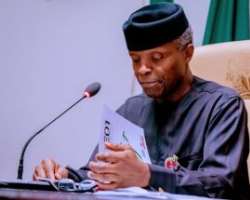 A popular Ghanaian prophet Nigel Gaisie has preducted that Nigerian Vice President, Professor Yemi Osinbajo, will become President before the end of this year, 2021.

The popular Ghanaian cleric, founder of Prophetic Hill Chapel, made the prophecy at his church during the December 31, 2020 watch night service.

The report by BBC (Pigin) did not say what the prophet said would happen to President Muhammadu Buhari, who still two-and-a-hakf gears outstanding on second and final four-year term.

For Osinbajo to become president in the stead of his principal one of the three things must happen: the president is impeached and removed for gross misconduct; or he is declared incapacitated and unable to effectively function in the office the president; or he dies in office.

Prophet Nigel Gaisie released 12 prophesies in all, out of which two concern Nigeria, the second being the one in which he predicted that a “creeping creature” would come out of Ghana and Nigeria and that hardship would increase in both countries as their economies would take a turn for the worse.

Among the remaining prophecies are a terrorist attack on America and a stadium disaster in Morocco.

The prophecies as featured by BBC (Pigin English Edition) are follows: