Nigerians join rest of the world to usher in New Year with fireworks, prayers 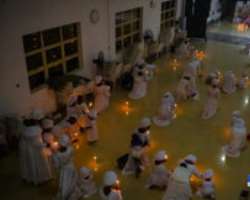 Millions of Nigerians across various cities on Friday ushered in the New Year 2021 with prayers, fireworks and expectations for the next year.

Earlier on Thursday, Australia, New Zealand and some country became the first places to welcome a New Year.

At various worship centres in the country, Christian faithful had gathered on Thursday night, thanking God for seeing them through to a year which many have described as tumultuous. Worshippers were seen dancing and praising God for His kindness to them.

Although the Federal Government and several states had cautioned against large gatherings in view of the surge in COVID-19 cases, in many churches Channels Television visited in Abuja, worshipper adhered to strict safety protocols as they prayed into the New Year.

Many churches including the Redeemed Christian Church of God (RCCG), Living Faith Church, Daystar Christian Centre, the Covenant Nation (TCN) and a host of worship centres had earlier said they will conduct their 2020 crossover service virtually.

“God has been so good to us. He has kept us despite the many hurdles of this year,” the General Overseer of RCCG, Pastor Enoch Adeboye, wrote in a Facebook post. “It is time to crossover gallantly into 2021. Be a part of the crossover service and be empowered for the year 2021. Don't miss it! God bless you!”

President Muhammadu Buhari is expected to give the traditional New Year broadcast later today (7 am), less than twenty-four hours after he signed the 2021 budget and the Finance Bill into law.

“Television, radio, and other electronic media outlets are enjoined to join the network services of the Nigerian Television Authority (NTA) and Federal Radio Corporation of Nigeria (FRCN) respectively, for the broadcast,” a statement from his spokesman, Garba Shehu noted.(Channels TV)