Sowore, other activists arrested in Abuja, taken into custody 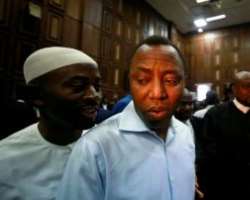 Publisher, rights activist and Amnesty International designated Prisoner of Conscience, Omoyele Sowore, was among activists arrested by the Nigerian security forces in Abuja following a peaceful procession to mark the New Yeear.

According to the SAHARA REPORTERS, an online news portal published by Sowore, “Eyewitnesses say policemen suspected to be with the Rapid Response Squad stormed Gudu junction in Abuja, wounding Sowore before carting him away with other activists at the location.”

Sowore and other activists were carrying out a peaceful procession to mark the New Year. The activists were almost done with their crossover procession when about seven loaded vans of the Nigerian security forces swooped on them, brutalising everyone at sight.

Omoyele Sowore during #EndSARS protest in Abuja
Eyewitnesses say police officers suspected to be the Rapid Response Squad stormed Gudu junction in Abuja, wounding Sowore before whisking him away with other activists from the location.

They were taken to Abattoir police station of the allegedly disbanded Special Anti-Robbery Squad (SARS) unit in Abuja, where they are currently being tortured and detained.

According to sources, the African Action Congress (AAC) presidential candidate in the 2019 elections was severely injured by the policemen.

Sowore could not be reached Friday morning. Efforts to contact him via his mobile proved abortive, suggesting that his phones must have been seized or put off. Others who were arrested with him could not also be reached for comments as of press time. See Also BREAKING: Sowore, Others Arrested In Abuja   0 Comments  8 Hours Ago

Those who last spoke with him confirmed they were taken to the Abattoir police station, Lokogoma, Abuja.

A source said, “Sowore, Sanyaolu Juwon, Michael and two others are currently detained at Abattoir Police Station, Abuja. Sowore is currently bleeding from the nose as the officers brutalised him.

“The comrades were almost done with their crossover protest when about seven loaded vans of the Nigerian military swooped on them, brutalising everyone at sight.

“Sowore was particularly singled out for torture by the security operatives, who gave him a bloodied nose before whisking him away.”

The arrest, brutalisation and detention of Sowore might not be unconnected to the #CrossoverWithProtest, a planned procession across the country on new year eve to demand an end to bad governance in Nigeria.

Hours before his arrest, Sowore had tweeted, “How about a crossover protest/uprising tonight? Anyone willing to participate? Pick up a candle and a placard showing your grievances against the regime; let’s upload our short videos and photos across our social media platforms. Let’s welcome the regime to a resolute 2021!

‪”#CrossoverWithProtest against tyrant ‬@mbuhari’s regime, candlelight for #LekkiMassacre; a placard for #EndBadGovernment;  procession to usher in #Revolutionary 2021, a fist for victims of repression-frozen bank accounts, malicious prosecution and detention of #Endsars activists‬.