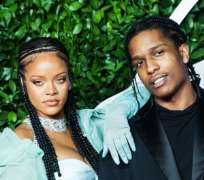 Rihanna and A$AP Rocky looked blissfully comfortable in each other's company during a romantic trip to Barbados.

The 32-year-old Where Have You Been singer had welcomed 32-year-old rap star A$AP – real name Rakim Mayers – to her childhood home.

The pair looked in high spirits as they enjoyed time on the high seas – with rumours Riri introduced the Praise the Lord (Da Shine) rapper to her family by taking him back home for the Christmas season.

Snaps of the duo on a yacht showed Rihanna dressed in an emerald green dress and A$AP wearing a white t-shirt and shorts. Rihanna and A$AP looked comfortable in each others company (Image: C. PITT-S. PITT-S. [email protected] / BACKGRID)

Photos showed the rapper placing an affectionate hand on the singer and businesswoman's shoulder, while others showed the pair looking very close together.

Further snaps showed the couple getting their adrenaline pumping as they pursued thrills on the ocean while taking part in water sports.

The pair flashed beaming smiles as they were joined by friends on a speedboat drawn donut.

A$AP threw his hands to the sky as he hopped on a four-person rider tube called the Sportsstuff Great Big Mable alongside Rihanna and two others.

For weeks, reports have suggested the two music stars have been falling for each other – with the trip to Barbados, where Riri was born and raised, viewed as confirmation by many that the pair have officially matched.

A source told Entertainment Tonight: “They've known each other for so long as friends and in a work setting, which makes it so easy for them to get along, travel together and be involved in each other's lives to the full extent.

“They always have such a good time together and definitely seem in love.”

TMZ reported the pair embraced all manner of sea based adventures during their Christmas break.

They wrote: “Rihanna and A$AP certainly weren’t afraid to show a little PDA on their chartered catamaran Monday.

“The two also hit the water on a jet ski and hopped in an inner tube for some high-speed action.”

The report added: “The couple celebrated Christmas together on Rihanna’s home turf, and from what we’ve seen, the holiday that been action-packed – boat trips, dinner dates and plenty of time with friends.”