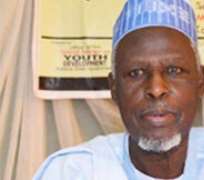 A chieftain of the All Progressives Congress (APC), Senator Abba Ali, has reacted to the worsening state of the insecurity in the country, saying President Muhammadu Buhari inherited the problem from the former government of the Peoples Democratic Party (PDP).

Ali, who spoke from Katsina, disclosed this on Wednesday during a phone interview on Channels Television's Politics Today.

“The insecurity we inherited in the country was not the making of the All Progressives Congress (APC). It is from other parties, the Peoples Democratic Party (PDP) when they were in power,” the member of the APC National Caretaker Committee said.

“The Chibok girls were taken away for quite some months; they did not do anything until this regime came in. Boko Haram in the past occupied 17 local government areas of Borno State.

Nigeria has been fighting the insurgency war for over a decade following the killing of Boko Haram founder, Mohammed Yusuf allegedly by the police authorities in 2009. Senator Abba Ali

The terrorists have launched a series of attacks in the northeast bordering Borno, Yobe and Adamawa with tens of thousands said to have died from the insurgency.

On November 28, the terrorists invaded Zabarmari village in Borno State and slaughtered no fewer than 44 rice farmers , a situation that drew condemnation from many, including the United Nations , United States , and Pope Francis .

Three weeks after, the insurgents stormed four villages in the southern part of Borno State and had a field day during the over 8-hour attack, despite military operations ongoing in the region.

Just today, seven local hunters died from a landmine left by Boko Haram militants in a village near Maiduguri, the Borno State capital.

The ill-fated hunters on a routine patrol with the military drove over the explosives that killed them instantly beyond recognition, a local vigilante source said.

Boko Haram and a splinter group known as the Islamic State of West Africa Province (ISWAP) have launched a series of attacks in Nigeria for more than a decade now.

More than 30,000 people have been killed and nearly 3 million displaced in a decade of Boko Haram violence in Nigeria, according to the UN Office for the Coordination of Humanitarian Affairs.

According to the UN Refugee Agency, violence by Boko Haram has affected 26 million people in the Lake Chad region and displaced 2.6 million others.(Channels TV)