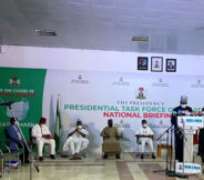 Effective from January 1st, 2021, passports of the first one hundred passengers that have failed to take their post-arrival COVID-19 test will be published in the national dailies and suspended till June 2021.

The Chairman of the Presidential Task Force on COVID-19, Mr. Boss Mustapha made the announcement in Abuja on Tuesday during a briefing.

Mustapha, also, the Secretary to the Government of the Federation (SGF), said that the names of the passengers would be published on Jan. 1, 2021, while the suspension of the passports would last for six months.

He also revealed that there are some additional quarantine protocols to be observed by travelers arriving from the UK and South Africa.

The new protocols according to the task force who already predict that January 2021 will be a tough month, is to minimize the possibility of virus importation into the country.

The SGF lamented the difficulties experienced in the national response, noting that the nation's response is passing through a challenging phase due to the seriousness of the second wave of infections in Nigeria.

“Week 52 has so far given us the highest number of infections in a single week to date. Our analysis shows that 16 out of every 100 tests carried out are positive.

“We are also seeing increasing transmission among younger people and this is not considered good and safe. We must, therefore, exercise utmost restraint by taking responsibility,” he said.

Mustapha said that the PTF had discussed two critical issues, Oxygen supply, and Case Management, and during the conversation with health authorities, CMDs of Federal Tertiary Institutions in Abuja, National Hospital; Jabi & Gwagwalada, the PTF directed that the level of Infections, Prevention and Control, as well as case management, should be prioritized immediately.

“With the increasing number of infections and hospitalization, our objectives are to ensure that infection, prevention, and control (IPC) is properly instituted to minimize spread and exposure of health care workers to the virus;

“Ensure that those who require hospitalization are well managed; those requiring medical attention for other ailments gain access to Treatment at medical facilities; and critical care is available and deployed, especially where oxygen is needed.

“The situation in Abuja and its environs has been of concern to the PTF,” the SGF stated.(Channels TV)