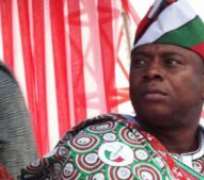 In a development that shocked many members, five party chieftains, including a former PDP state chairman and a current House of Assembly member, Ebenezer Alabi and Rasheed Elegbeleye respectively, were suspended last Tuesday, shortly after the rebuilt party secretariat was commissioned in Akure.

Their suspension is deemed an aftermath of a visit to the Lagos State residence of the ex-governor of Ekiti, led by the two PDP senators in Ondo State, where they declared unalloyed support for Fayose in his battle lead the party in the Southwest.

The internal strife had become pronounced in the build-up to the October 10, 2020 governorship election in Ondo State, soon after Makinde became the Chairman of the Ondo State Election Campaign Committee, and declared unflinching support for Eyitayo Jegede's candidacy.

The division was noticeable as some party men revealed Fayose's preference for the Deputy Governor, Agboola

Fayose had, ahead of the selection process, appealed to the Deputy Governor, Ajayi, during a courtesy visit to his residence in Ado-Ekiti, to return to the PDP. Ajayi was a foundation member of PDP in 1999 but ditched the party for the ruling APC in 2016.

However, in a show of how different a terrain Ondo might be politically, Fayose was publicly humiliated during the PDP grand finale rally in Ondo city, as some party members loyal to Makinde used the opportunity to deflate the ego of the former governor. The party went on to witness one of its worst crises during the congresses, given the events that followed Ajayi's quest to pick the party's governorship ticket; with some members accusing Jegede of manipulating the congresses to hijack the party structure.

It could be recalled that shortly after the guber poll had been lost and won, the state working committee members, state elders committee, Board of Trustees, former chairmen and governorship candidates of the party, all affirmed that the party was not in disarray.

The party leadership stressed that there was no cleavage within its rank and file, and warned those fanning the embers of disunity in the state chapter to desist forthwith.

In a statement by the state Publicity Secretary, Kennedy Peretei on November 24, 2020, the party leadership unanimously agreed on a five-point resolution, declaring support for Governor Makinde's leadership of the party in the region.

They lauded him for holding successful and rancour-free congresses, especially the state congress that held on August 4, 2020, adding that, “Ondo State PDP is not made up of ingrates, but a crop of mature and resourceful leaders who can read in between the lines.

“We do not want to be dragged into the cesspool of over-ambitious persons who wish to create factions in the PDP family with the sole aim of leading such factions to join the sinking boat of the All Progressives Congress (APC).

“The meddlesome interlopers from neighbouring states fanning embers of disunity should steer clear of Ondo state. They are only feathering their nests. We encourage them to put their house in order,” the statement read in part.

Few hours after the state secretariat burnt by #ENDSARS protesters was rebuilt and commissioned, the party announced the indefinite suspension of five party chieftains for anti-party activities and gross misconduct. The suspended chieftains include Alabi, Elegbeleye, a former state Secretary of the party, Chief Oyedele Ibini; a former federal lawmaker, Lad Ojomo and the immediate past Southwest Publicity Secretary, Mr. Ayo Fadaka.

Peretei explained that, “By this decision, they are expected to stop parading themselves as members of the party. All organs of the party are to take note in this regard.” He added that the action was “Pursuant to Section 58(1)(a)(b)(f) and (h) of the Peoples Democratic Party Constitution (2017 as Amended).

“We also want to put it on record that, the State Executive Committee of the PDP in Ondo State did not send any delegation to anywhere to represent the party. Whoever lays claim to such is an impostor and does not represent the opinions of our teaming supporters in the state.”

Fadaka, however, swiftly responded to the suspension, saying: “No reason other than a blanket tag of anti-Party activities have been established by them as the basis for this step. I am amused really as my suspicion of inadequate capacity in managing our great party has just been confirmed.”

The former Zonal Publicity Secretary added that “the suspension is actionable and I assure you that this action will ignite a series of reaction.”

Leading the state delegation to Fayose's house in Lagos State last Monday, Senator Nicholas Tofowomo said the former governor was a credible leader of the PDP in the Southwest, adding that he was accessible, a grassroots operator and a defender of fairness, equity and justice in the party in the last 17 years. Similarly, Ojomo was quoted to have described Fayose as a great and faithful leader, and a fighter for justice.

During the visit, Fayose had reiterated that Governor Makinde was not the party's leader in the Southwest, saying that leadership should be earned and not for anyone as a title.

The former governor praised the members of the delegation for “not sitting on the fence,” adding that, “It is dangerous to sit on the fence. I don't play to the gallery.”

He also berated Makinde's supporters for calling him an “APC man,” protesting that “why wasn't he labeled so when he supported the Oyo State governor and worked for his victory in the last general elections.

“Tell the baby governor that the way up is the way down. Let Makinde put feeding bottle in the mouth of his dogs. You are called a leader because you earned it, not your title. “Can I be an APC man and be fighting President Muhammadu Buhari?

“I was governor at 42. He is governor at 51. I don't deserve an insult from Makinde. Governor Makinde is not my leader. He is my follower. Respect should beget respect. I have been a warrior. They thought I would be with the Economic and Financial Crimes Commission (EFCC) now. But, I am surviving,” he said.

Speaking on how to reposition the party in the region, the former Ekiti State governor insisted that the erstwhile Information Commissioner in Ondo State, Olafeso, should be the next PDP National Vice Chairman (West). He revealed that this had been agreed on earlier at Makinde's house in Ibadan, Oyo State.

Meanwhile, PDP governorship candidate in the last election and close ally of Governor Makinde, Jegede, while speaking at the party's secretariat commissioning last Tuesday, assured his teeming supporters that he would soon take over the affairs of the state from the APC and Governor Oluwarotimi Akeredolu.

Jegede, who hinged his optimism on the weight of evidence before the governorship election tribunal sitting in Akure, said: “The APC in the state is jittery about losing in the court. We shall take over soon.” The representative of Governor Makinde, the National Vice Chairman of PDP Caretaker Committee, Chief Dayo Ogungbenro, was also in attendance at the event.

In his address, state chairman of PDP and ally to Governor Makinde, Mr. Fatai Adams, charged members across the 18 local government areas to be more committed and loyal to the party.

According to him, the benefits that members would derive from the party would henceforth depend on their contributions. He commended one of the governorship aspirants, Godday Erewa, for single-handedly rebuilding the burnt secretariat.

“This is the first time in the history of politics in Nigeria that an individual would build a secretariat of a party. Whenever there is anything to be shared or appointments to be made, contributions of would-be beneficiaries would be put into consideration,” he said.

But the APC Director of Media and Publicity, Mr. Steve Otaloro, described the hope of the PDP candidate, Jegede, as laughable, saying, “APC is confident that the tribunal will revalidate the people's mandate for Akeredolu as governor.”

“The recent insinuation by Mr. Eyitayo Jegede that he will reclaim the Ondo State governorship election mandate given to Governor Oluwarotimi Akeredolu at the election petition tribunal is laughable.”

Otaloro explained that the people freely choose between APC and other political parties in the state. “Therefore, for Mr. Jegede, who was strongly rejected at the said election, to be hopeful of reclaiming the said mandate in a court of law is subject to wishful thinking.

“Mr. Eyitayo Jegede knew he lost the election, but he is only trying to save face by going to court. In doing that, he premeditates to employ certain abracadabra of law to steal the people's mandate from the rightful owner. However, just as he failed at the poll, he will also fail at the tribunal.”