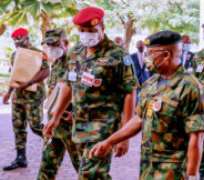 Following the increased rate of insecurity in the country, Former Department of State Service (DSS) Director, Mike Ejiofor has joined voices with Nigerians calling for the removal of service chiefs.

Ejiofor during an interview with Channels Television on Monday said President Muhammadu Buhari should surprise Nigerians and respond to the calls by those seeking removal of the service chiefs.

“I expect that Mr President should take Nigerians by surprise, change the service chiefs. The attitude of Nigerians to security agencies should also change.

“We are expecting some equipment coming into the country. I think with these – change of tactics, change of equipment, change of attitude, change of service chief, change of approaches general…with all these we will make some progress,” he said.

The Senate on different occasions recommended that President Buhari remove the Service Chiefs and replace them with people with fresh ideas and solutions.

The lawmakers first made the recommendation at plenary during a debate on security in the nation and the attack on rice farmers in Borno State which left over 40 dead.

They also lamented over the state of insecurity in the country and recommended the removal of the Service Chiefs during their debate on the abduction of over 300 students following gunmen's attack on Government Science Secondary School (GSS) in the Kankara Local Government Area of Katsina State.

This follows the motion raised by one of the lawmakers, Senator Bello Mandiya, from Katsina State.

Senator Sani Musa while seconding the motion said, “There is a need for this chamber to draw the attention of Mr. President that enough is enough, these Service Chiefs should go.

“I am being very honest and talking from the heart. Enough of this thing. I wish the National Assembly will take drastic action on this. We have been appropriating; where are these funds going to?”

Senator Gabriel Suswam during the debate criticised the service chiefs and said lawmakers will support the Senate President in whatever resolution decided to address kidnappings and insecurity in the country.

Senator Opeyemi Bamidele lamented that the Senate has done its best but the executive is not listening and they are becoming helpless. He questioned why President Buhari has refused to remove service chiefs.

The security situation across the country is still a big challenge with the North battling terrorism, armed banditry and the south is battling kidnapping and other forms of crime and criminality.(Channel TV)