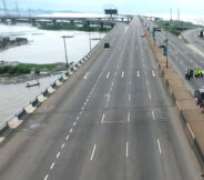 The Third Mainland Bridge will be reopened at midnight following the closure for repairs on the bridge.

The Federal Controller of Works Lagos, Mr Olukayode Popoola, confirmed this on Sunday.

According to Popoola, the contractor was able to achieve the task within 48 hours, contrary to the initially scheduled 72-hour timeframe.

“We have completed the casting of the three number expansion joints on Third Mainland bridge.

“Therefore, the bridge shall be opened at 12:00 midnight Sunday 27th December, and no longer Monday 28th December.

The closure of portions of the bridge which commenced earlier in the year, had initially been scheduled to last six months and divided into two phases of three months on each carriageway.

The process was, however, extended by one month due to the recent #EndSARS protests in Lagos, thereby extending the completion date from January 2021 to February.

For the yuletide season, which was also a public holiday, the bridge had to be shut down totally in order to stop vibrations caused by the movement of vehicles. (Channels TV)