How I Escaped Being Killed During Dimka's Coup: Obasanjo 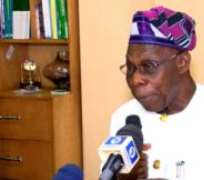 Former President Olusegun Obasanjo, Sunday, disclosed that it was General Olu Bajowa that saved him from being killed by Lieutenant Colonel Buka Dimka in the February 13, 1976 military coup d'etat.

Obasanjo made the revelation at Igbotako, Okitipupa Local Government Area of Ondo State, while speaking at the celebration of 80th birthday of General Olu Bajowa (Retd).

“I want to say something about Olu either he knew it or he did not know. When Dimka coup came, if Olu had not been what he is, I would have gone with the coup. Let me tell you the story.

“Olu is very respectful. He is very conscious of our culture. He had a child, a boy, and wanted to name the child after me. He had to call me early in the morning, that morning that Dimka struck.

“And because Olu said he was coming, I had to wait a little bit. I waited beyond the time I would have gone out.

“Indirectly, that was how Olu Bajowa saved my life,” he stated.

He said Bajowa performed very well when he (Obasanjo) drafted him to go and lead 11 Battalion during the nation's civil war.

In another development, the Ondo State Governor, Mr. Oluwarotimi Akeredolu, has called on owners of local radio stations to dwell more in educating and disseminating information in local languages.

He made the call while inaugurating a new radio station in commemoration of the 80th birthday of General Olu Bajowa (retd) at Okitipupa.

The governor commended Bajowa for the pivotal role he's performing towards development of the Southern Senatorial District of the state.

While speaking earlier, General Bajowa, disclosed that the aim of establishing the radio station was “to complement the effort of Government in reviving and promoting Ikale, Ilaje, Ijaw-Apoi and Ijaw-Arogbo culture, tradition, custom and by extension the Yoruba heritage, which are now becoming abandoned or extinct.

“We also identify ourselves with the government effort to make information an important tool for social development and dissemination of the benefit of democracy at the grassroots level.”

He, therefore, assured the governor that the station (Awawa Radio 94.1fm) “will support the administration in the provision of necessary information on your government programmes and actions.”

The event was attended by many dignitaries from different parts of the nation including Admiral Akin Aduwo (retd); the Ooni of Ife, Oba Adeyeye Emitan Ogunwusi, Ojaja II; Osemawe of Ondo, Oba Victor Kiladejo; the Abodi of Ikaleland, Oba George Babatunde Faduyile; and several royal fathers from Southern Senatorial District of Ondo State among others.