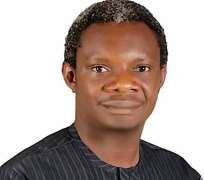 In a way to ensure food security in the country, Member representing Ezza South/ Ikwo Federal Constituency in the Federal House of Representative, Hon. Chinedu Ogah said he has sponsored a bill for the establishment of Federal College of Food Technology in Ikwo where various foods could be packaged and processed for later use.

Hon Ogah made this known in an event he organized to mark his one year in office tagged "Chinedu Ogah Foundation, The journey so far" in his country home Item Amagu Ikwo in Ebonyi state.

He explained that the need for a college of Food Technology has become urgent in view of the fact the people are predominantly farmers and need to have value for their labour by having the food items processed and packaged.

According to him, with the bill, " Federal College of food Technology. Ikwo( Establishment) bill 2020, the people of the Ares will heave a sigh of relief as their processed food items will be moved to different parts of the world and the country will experience food security.

Hon Ogah stated that he has moved motion for urgent need to wade into the communal crisis that has bedeviled some communities in Ikwo and also for the construction of a link bridge and rehabilitation of Abakaliki/ Ikwo/ Obubra road.

Other motions he said were on the need to declare state of emergency on power sector and to investigate alleged exhortation, passport racketeering and corrupt practices by officials of the

Nigerian Immigration Service.
He reiterated his prepardness to continue to offer his constituents effective representation and enjoined to give maximum cooperation to APC led government both at the centre and at the state level.

In his remarks, the Southeast zonal secretary of All Progressive Congress, Mr John Uwaede said Hon Chinedu Ogah has done WWII in representing his people effectively especially in the areas of providing employment opportunities to the youths, construction of roads and bridges among others.

Mr Uwaede called on the people of Ikwo/Ezza South Federal Constituency to rally round Hon Ogah and give the support he deserves to enable him provide more dividends of democracy to them.

The highlight of the occasion was the distribution of gifts worth millions of naira such as clothes, buckets and food items to the beneficiaries who are majorly widows, less privileged, party Executives and APC members in the entire 32 political wards in the constituency.