Another Debacle is Coming Down the Pike 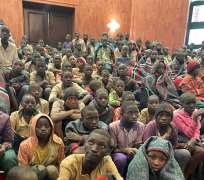 After the recent kidnap and eventual release of 344 schoolboys from Kankara in Katsina State recently, a lot of hot air is being blown about by the Nigerian Army, trying to showcase their 'professionalism.'

We thank God the young lads were returned unharmed to their parents.

Several questions however remain unanswered.
What exactly does the Nigerian Army mean by neutralizing the bandit terrorists?

Are they referring to killing, capturing, or chasing them away?

Were any Fulani bandit-terrorists killed or captured under this nebulous banner of neutralization?

If so where are the captured bandit-terrorists or their dead bodies?

Were any students killed as earlier reported?
Why did the Government initially say that only 10 students were still in captivity only to later acknowledge the release of 344 boys?

What role did the expansionist Fulani herdsmen body, Miyetti Allah, who are the Nigerian equivalent of the MAGA Messiah's 'Proud Boys’, play in 'negotiations' with the bandit-terrorists that eventually led to the release of the lads?

How much was paid as compensation to the Fulani bandit-terrorists before securing their peaceful cooperation?

Please ignore the Katsina State Governors claim that nothing was paid.

How much has or will soon be paid to the expansionist Fulani Miyetti Allah group?

What are the linkages between Boko Haram terrorists and Fulani bandit-terrorists?

Is it true as Nnamdi Kanu of the Independent Peoples of Biafra secessionist group, IPOB has alleged, that blankets were provided for the kidnapped boys during their captivity?

If so, was it not a carefully planned and executed criminal enterprise operation to defraud Nigeria and garner good public relations for the masterminds?

We are still trying to understand and unravel what exactly happened during this dramatic kidnap.

While thanking God once more for the release of the young lads, one thing is clear.

As at now nothing can be ruled out just as nothing should be ruled in without verifiable evidence.

Investigative journalists should move in and interrogate those boys on the exact details of their ordeal.

Nevertheless, who are the prime beneficiaries of the entire affair?

They include:
1) The expansionist Fulani herdsmen group Miyetti Allah.

2) The Fulani bandit-terrorists who carried out the operation either independently or under contract from the intended beneficiaries.

3) The Nigerian Army who are proudly advertising their valor and professionalism.

4) Poverty in Nigeria which will become amplified.
5) The Presidency and the Katsina Government who have a prime opportunity to draw down and write off billions of Naira the local currency, under the line charge or sub-heading of providing security and maintaining the peace.

Who are the prime losers?
1) Education in Northern Nigeria. Many schools are closing out of fear as many parents are withdrawing their wards from their schools.

2) The Nigerian Treasury from which coffers the funds expended on this debacle will originate.

It is advised that salt that loses its taste should be thrown out.

The Buhari Administration was always in bad taste with regards to performance, yet Nigerians are unable to summon the will and courage to throw them out.

While still mulling over all of this, we await the next debacle in the pipeline.

As Americans would put it, we await the next debacle coming down the pike.