Lagos BRT: A Reincarnation Of The Molue? 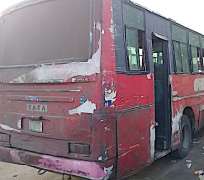 The rebirth of a soul in another body is a simple explanation of what reincarnation stands for. As recent observations have shown, it seems "molue" is back in another form. For the benefit of those who are quite young and possibly, those who are not acquainted with the 'molue' era, let me take you through a one - paragraph journey.

In Lagos, a lot has happened, with many of them hugging our memories tightly. Molue, as fondly called, was a bus infamously known for its harshness, lack of comfort, over boarding, but relatively affordable. More irritatingly, molues could take an eternity to convey their passengers from one destination to another. It was never a preference for the elite, but a usual taste for the poor, at least, in the sense of the word. After the undeniable reign of the molue buses, the curtain eventually drew on them as they became extinct. How they disappeared and Why they vanished from Lagos roads are matters for other times.

In all honesty, the Lagos BRT has largely disguished itself from the 'molue'. It runs on a separate lane, which allows it to deliver a faster service. These blue Lagos buses, by design, are suited to provide comfort as they are fully air conditioned and aptly built. They give you the joy and unalloyed excitement that you may possibly get if taken by a modern day cab. To add to their distinction, you may make payments electronically, a superior service, in the face of my childhood 'molue' buses. The drivers, unlike those of the 'lemon' molues, drive with a high level of professionalism as they compete not against traffic nor 'delivery time'. The Lagos BRT is further unique as it does not engage the services of a regular bus conductor, who could be malicious, uncultured, talkative and possibly spurious. On this account, the Lagos BRT is not a reincarnation.

In recent days, the Primero Transport Services Limited - the firm in charge of the BRT - has begun to give their passengers a high fever of discomfort as the BRT is strangely becoming the metaphor of my childhood molue. The experience in some Lagos Blue Buses is similar to the tragic reality of the ancient molue buses, where those standing could almost outnumber those sitting. This situation further becomes nauseating as the air conditioners will not be powered, resulting in a suffocating experience. The capacity of the bus is most times overstretched, bringing us a sad memory of the molue. Unlike the "Molue period", an interminable queue could be seen from time to time with no soothing words from the station manager. Grown-ups are , today , packed together like sardines. Adults, who having gone through the rigours of their daily work, are seen on the BRT with contorted faces showing a glaring hopelessness.

We need the comfort even though this is Lagos, where everything and everyone is supposedly rugged. Today, I tell a disgruntling story of an infamous molue. Tomorrow, may be, my son will tell a sad tale of an almight BRT that went the way of the molue.