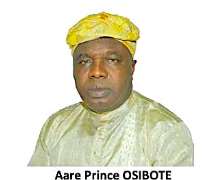 The President General of Oodua Peoples’ Congress (OPC), Aare Prince Osibote has called on the newly inuagurated executive members of the organization to consciously engage themselves in the task of changing the current crime narrative in their communities.

Addressing the new leaders, the OPC helmsman reminded them not to lose focus on the fact that they are the source of pride, hope and inspiration to millions of the Yoruba ethnic nationality in Nigeria and in the Diaspora.

He stressed that Oodua Peoples’ Congress (OPC), founded by a prominent Yoruba visionary, Dr Frederick Fasehun must pragmatically rise to the occasion to show heroism, demonstrate capacity, exhibit endurance and display nationalism in tandem with the typical Yoruba in all circumstances.

The organization announced the introduction of adult learning unit, described as a 'child of necessity' in the changing world. This initiative will further bolster the organization's capacity to network in the global environment, he stated.

The ocassion witnessed the elevation of some members, reassignment of portfolios to some while some were relieved of their previous portfolios, premised on the spirit of progress, wise counsel and purposeful leadership and vision.

Responding, a newly appointed executive member praised Aare Prince Osibote for meticulously walking in the vision of the founder of the organization, Dr Frederick Fasehun. He pledged to tow the footsteps of purposeful leadership as examplified by the President General.

Below is the full text of his address:
This Is the Time to stand up and be counted

An address by The President General of Oodua Peoples’ Congress (OPC), Aare Prince Osibote on the occasion of Inauguration of some National Executive Council Members.

Distinguished guests and esteemed members of our great OPC, it is as usual, a great honour and privilege to stand before you today. I am always proud to state the obvious that you are the source of pride, hope and inspiration to millions of the Yoruba ethnic nationality in Nigeria and in the Diaspora

At a time like this, every right-thinking citizen of this country should stand up to be counted. With the escalating and frightening dimension of insecurity across the country, it is perceptible that no one or place is any longer safe. We need to gird our loins, become extra-vigilant and proactive to safeguard our environment and the society. This is in line with the vision of our founder, Dr Frederick Fasehun to preserve the heritage of the Yoruba ethnic nationality.

While we pray for divine assistance, we owe it a duty to pragmatically rise to the occasion. Beyond the understanding of the fact that security is the business of all citizens, many of us have taken it upon ourselves to collaborate and cooperate with others to enhance the security of lives and properties in our environment. Having accepted the mandate to offer this important service to humanity, we should be ready to make the necessary sacrifices in order to succeed and convince others that there is no room for half measures because whatever that is worth doing, is worth doing well.

All of us, including the analytics amongst us should not pretend that there is relative security of lives and properties in Yoruba land. That is far from the truth because all forms of violent crimes are already here with us. Therefore, the arduous task before you as you take the oath of office from this moment is to move to change the current narrative, synergize in a concerted effort to restore hope in the distressed and frightened majority of our people.

This informed a few of the structural changes that have taken place in our organization, coupled with the intent to reinvigorate and redirect OPC in line with its cardinal focus and objective of preserving, protecting and projecting the true values of the Yoruba ethnic nationality. I candidly ask you to show heroism, demonstrate capacity, exhibit endurance and display nationalism in tandem with the typical Yoruba in all circumstances and places as you discharge this noble assignment.

We must not lose sight of the daunting fact that we all have a date with history as posterity will judge how we are able to preserve the legacies of our forefathers.

On September 12, 2019, our organization unveiled a list of members of the National Executives premised on decent standard of conduct since OPC is designed as a law-abiding entity, with membership across the globe. As Egbe omo ilu, the executive members are charged to be good ambassadors and the bastion of hope for the citizens. It is your conscious responsibility to propel good image of our tribe among members and other ethnic groups within your various communities. We all know that the organization has come a long way. Today, some members will be elevated; some will be reassigned as a few will be relieved of their positions. It is all in the spirit of progress, wise counsel and purposeful leadership and vision.

As part of the ongoing reforms towards repositioning our great and dynamic pan-Yoruba organization, we have created an adult learning unit. The training programme is another child of necessity as the world continuously undergoes changes. We in OPC cannot afford to be left behind.

On this note, I welcome you all onboard as OPC consolidates her prime place as the voice and backbone of the people. The new faces of the Congress will be released later.

Thank you for your attention. Oodua a gbewa o. Ase.