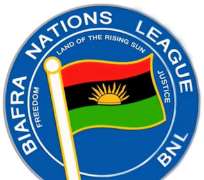 Biafra Nations League, BNL, has finally spoken about the Security outfit floated by the Indigenous people of Biafra, IPOB. Speaking in Owerri, capital of Imo State via a video released by the group BBS Media today, the National Leader of BNL, Princewill Chimezie Richard said that the security outfit floated by the IPOB is a welcome development only if the motive is to protect the East from invading Fulani herdsmen. He said that there is nothing wrong with having a Vigilante but hinted that since the security group is not Biafran Army there is no cause for alarm. He further stated that no one group can set up an army of a nation of different tribes. Princewill Richard also advised Nnamdi Kanu's led IPOB not to send youths involved in the Eastern Security Network to confront armed Fulani herdsmen empty handed.