I Offered Myself To Bring S/e Zone To Central Politics", Umahi Restates. 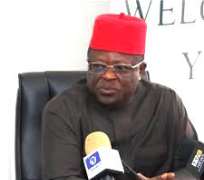 Ebonyi state Governor, Chief David Umahi has restated that whether the people of the Southeast likes it or not, he has sacrificed himself to bring the geopolitical zone to the politics of the center.

Umahi made this remarks while receiving the elected and appointed officers from the thirteen local government areas led by the ALGON Chairman, Mrs Chinyere Iyoku in a solidarity visit to the governor at the new governor's lodge, Abakaliki.

The Governor pointed out that different calibre of people in Nigeria have been defecting to other parties but non has ever raised the kind of dust that his own defection has raised.

He said such goes to attest that the hand of God is behind his decision to move from Peoples Democratic Party to All Peoples Congress ( APC) which will in turn reposition the zone for the better.

The governor said that the remnants in Peoples Democratic Party in Ebonyi state don't have the grassroots and cannot make noise in the land of Ebonyi adding that there is no need listening to them.

He noted that Ebonyi state has always been powerful even when they were not in APC centre government, and wonder how powerful the state would be now that it has the national.

He recalled that in 2014 when they started the journey they were not afraid and were very few, stressing that the remnants of the house of Saul will always be going down while that of David would be goi g up.

He revealed that some of the Abuja politicians have been asking him for automatic tickets just as they claimed that the Council chairmen and the House of Assembly members were vying for their positions.

Umahi said he quickly reminded them that for them to win elections he was going from house to house to beg those people to vote for them.

"But let them know that in 2014, we were not up to the 5 percent of the people we have now. So, if 5 percent could don't, how much more this number we have now.

"There is no defection in this country that ever made the kind of noise, this one is making. Don't you know that the hands of God are with us. Whether South-East likes it or not, I have sacrificed myself to forcefully bring Southeast to the politics of the centre.

"So, what should we be afraid of? So, don't mind the remnants of the house of Saul. They don't have grassroots? They can only be making elsewhere, they can't make in the land of Ebonyi. So, why would you talk or listen to them? Even when we were not in APC centre government, Ebonyi State was still very powerful. How much more now that we have the state and we have the national? What are we afraid of?

"You know, some were telling me in Abuja that they need automatic tickets, that the Council chairmen and the House of Assembly members are vying for their positions. I said, "but did you know I was going from house to house to beg these people to vote for you. You have to come back and do it yourselves."

"That where the disconnect is. This election is not going to happen in Abuja, na Ebonyi state e go happen. People that want to retire themselves from politics, na look I go de look them", he stated.