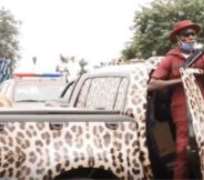 The Ondo State Security Network Agency, also called Amotekun Corps is not relenting in flushing out criminals from the state, as its men have arrested one-armed herdsman and two cattle rustlers in some parts of the state.

Addressing journalists on Wednesday at the headquarters of the Agency in Akure, the Commander of Amotekun Corps in the state, Adetunji Adeleye said the latest of the crackdown on criminals was in response to a distress call made by farmers at Osi Community in Akure North Local Government Area.

Adeleye disclosed that some herdsmen armed with dangerous weapons were rearing their cows, entering farmlands, eating and destroying planted crops.

He added that the herdsmen turned deaf ears to Amotekun men who told them to move away from the farmlands but launched an attack on them, but the security operatives were able to overpower one of the herdsmen and arrested 16 of the cows.

The Corps Commander also said that some suspected cattle rustlers have been arrested by his men upon complaints against them by some herder men in parts of Odigbo Local Government Area of the State.

The cattle rustlers, according to the Amotekun Commander, had earlier ran away but were later arrested following an intense manhunt by his men with the cooperation of the Fulani herdsmen whose cows were stolen.

He said the corps had also recovered a NISSAN Serena Bus marked LAGOS FJ 423 KRD, brought by the suspected rustlers who wanted to steal more cows.

Adeleye noted that the rustlers have been handed over to the Agro Department of the Nigeria Security and Civil Defence Corps, NSCDC, for detailed investigation.

The commander said the Corps has equally arrested one Lawal Abubakar along the forest near Ago Panu in Area on the way to Ose Local Government while in possession of a gun without a license. (Channels TV)