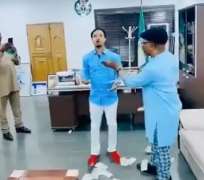 A viral video showing Anthony Agbazuere, the chief of staff to the Governor of Abia State, Okezie Ikpeazu, spraying naira notes on Onitsha-based clergyman, Chukwuemeka Ohanaemere popularly called Odumeje the ‘Indaboski’ has been trending on Twitter.

In the video, Agbazuere is seen spraying naira notes on the clergyman as he introduced himself in his numerous names.

The date when the video was recorded isn’t certain but it appears to have been shot in Agbazuere’s office.

Nigerians on Twitter are however berating the politician for carrying out such an act inside his office.

@DOlusegun tweeted, “While civil servants and lecturers are owed years of salary, terrible infrastructure and a piss poor governance in Abia state, here is how the Chief of Staff to the Abia State Governor is spending the people’s wealth in the Governor’s office.”

@GoziconC writes, “This is the Chief of Staff to the Governor of Abia State spraying money right inside the Governor’s Office. Our hopeless celebrities will not talk about this height of irresponsibility in a state where civil servants are suffering because it won’t get them enough clout.”

@evraaikay40 tweeted, “The money sprayer is Chief ACB Agbazuere, the SSG of Abia State. A state where primary school teachers, civil servants, pensioners are being owed several months of their entitlements. The state itself is in a decrepit condition but its coffers are being emptied on a clown.”

@DoctorEmto writes, “ASUU should continue the strike because there’s money but they don’t want to release it except for the likes of Indabosky Bahose AKA Odumeje. This govt na cruise.”