Why There Is No 'evidence' In Nigeria 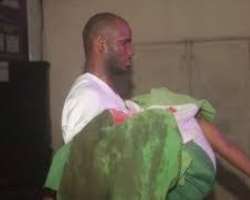 The art of no evidence as witnessed in the bodiless #EndSARS massacre in Lekki Nigeria allows official artrocities to get buried in the sand of time.

This governance style has always been used by pseudo military forces of coercion pretending to be democratic because they control the judiciary, the old press,the enforcement arms,the States,the communities including the vigilantes who report to the local police. Since they also appoint members of the top security councils,they control the doctors,the nurses through their national bodies- chairmen,the mortuary attendants and even the drivers and keke unions. They now control the community heads,the councilors,the political parties,even the labour unions. Those they cannot control like the Amnesty international they want them out of the country.

So when you have covered all the flanks it becomes easier to commit extra judicial killings and cover it up. It is also easier to frame innocent people and dispose of perceived political enemies without anyone like the CNN asking or getting their questions answered by the various authorities. In the same vein you can see the sense in their always asking for evidence. They do not ask for evidence because there is none but they want to see who else has any evidence so that they can focus their target on such spots. That is why case files miss and witnesses disappear even after appearing in courts. If you simple as take picture,they can go to any length invade you. If they cannot do it officially then they send bandits and look the other way when people eventually make a report on the subject later. Since the innovation of ritual killing and selling of body parts started those who disappear could have had valuable parts harvested and sold in Europe as donor organs for millions.

So when you see all the siren move past you it could as well be the heart of a missing person being rushed to the airport. Someone said the rest body is indeed capable of being dissolved in acid or burnt without trace and this country may not yet have pervasive forensic investigation to identify bone or tooth remains. Except where a top member of the parties or government or billionaire or other is involved mistakenly then the world is able to know about what is happening because money or influence can then bring forth justice to bear. So it's likely to be reason why "gory disposals" at detention cells may not be carried immediately until it's clear that not many big people are interested in the case. It's the same system that enables the society to operate in cultic circles and job recycle brothers,in-laws or name links at the top so that the secrecy of operations may be sustained.

So before appointment of new staff, the security agencies may decide to vette the final list received from numerous lists from top officers or functionaries and their wards who are loyal to them and can be trusted to keep the secret. Not to worry it's difficult to get to hear it because no one is saying anything anyway. So since the upper echelon of the security may not be that highly renumerated,they get by depending on returns from the line upwards and may therefore be really impatient with any one who makes no returns. And often they set targets. Now in bad days the best way to raise such target money for the returns that keeps you on your post may well be through other such means. Of course it's only the Social Media that was able to break through this age long barrear of silence and that is the sense in attempting to kill the social media. So you can understand now.

Also the sense in attempting to profile anyone seen with phone or camera or indeed anyone with placard. So you can see why demonstration is seen as more,treasonous or rather dangerous than Bandits and Boko Haram. You can see why bandits cannot be brought to justice because they may there we'll be doing a national duty, helping to cover the tracks of their masters who are busy trying to destroy any evidence any where. All these are being done to keep the "image"of Nigeria going so that such atrocities should never come to light.

It is this image established by the Zik/ Balewa government of the 1960s that allows gullible international community to lend money and do long term trade. The international community are always there to be taken for a ride because they do not know that the system that made them approve Nigeria in 1960 has been completely eroded ;they are still believing in the 1960 constitution and flag and Anthem and it's golden vision.

But whenever such few cases come to light they often come together quickly and decide to push in an angel,an incurruptible successor through the same ballot box since they too want their left over debts to be paid, they want an ally in war,therefore gleefully they become oblivious of the crimson red blood of innocents flowing below and on the street because there is always no evidence and indeed no census to determine how many we are and therefore how many are missing. So there is never a time when the number of dead matches with official figures because the dead cannot talk for themselves and even if they can talk or call ,their cell phones are always the first thing they are disposessed of.