This Year and Every Year, Thank You for Your Support of AHRC and Welcome to the Virtual Gala: 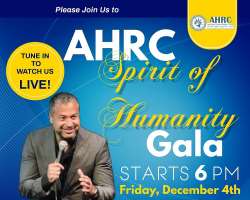 On behalf of myself and my fellow AHRC Board members, I thank you for your support of AHRC and welcome you to the upcoming annual AHRC "Spirit Humanity" Gala that will be held virtually this year due to Covid-19.

Since its inception, the American Human Rights Council (AHRC-USA) has worked tirelessly to promote and advance the cause of human rights and the culture of human dignity and human respect at home and abroad. AHRC fellow board members, volunteers and staff have spared no effort to provide the much- needed services to those whose basic human rights were violated or compromised. In addition, AHRC's public educational and awareness campaign (AHRC News & Views) has captured the respect of thousands of friends and supporters.

Despite our limited resources and despite the heavy impact of Covid-19, AHRC continued its diligent work to provide its vital services to the public. No doubt that these exceptional times put AHRC in dire need for financial support. Please consider being a proud supporter of our Gala. No amount is too small. Every donation counts. Please visit www.ahrcusa.org to donate.

Finally, our heartfelt appreciation goes to all who have been supporting us through the years. I look forward to seeing you all on Friday, December 4, 2020 at 6:00 p.m. Please see the Gala's postcard for the link information.

Thank you and happy holidays to all,
Sincerely,
Dr. Saleh Muslah, President AHRC Board