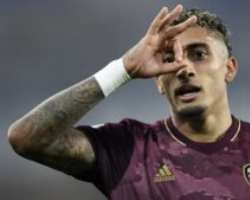 Leeds United claimed their first Premier League win at Goodison Park as Raphinha’s late stunner saw off Everton 1-0 in a game packed full of chances but not goals on Saturday Night Football.

In a game which saw the two sides create a combined 38 attempts on goal, the Brazilian produced the decisive moment of quality as he opened his Leeds account with a brilliant drilled effort into the bottom corner 11 minutes from time.

Everton, who had two goals ruled out for offside in the first half, were indebted to the saves of goalkeeper Jordan Pickford for keeping them in the game as long as they were, but Raphinha’s strike condemned the Toffees to a fourth defeat in five as they missed the chance to climb up to third in the Premier League.

For Leeds, their first victory at Goodison Park since 1990 ends a run of three games without a win and sees Marcelo Bielsa’s side move up to 14 points, two adrift of Carlo Ancelotti’s side.

Man of the Match: Kalvin Phillips.
Leeds were sharp from the outset and should have taken the lead inside the first minute when Raphinha was played in behind makeshift left-back Alex Iwobi, but his poked effort under Pickford was cleared before it reached the target.

It was an early indication of what was to come, with both sides guilty of squandering a host of chances in a pulsating first half which had everything except a goal.

Abdoulaye Doucoure drew a fine save from Leeds goalkeeper Illan Meslier on seven minutes but suspect defending from Everton’s makeshift back four saw Jack Harrison teed up at the end of a sweeping counter, but he dragged a shot wide at the near post.

The Leeds chances kept on coming, with Pickford’s outstretched leg denying Patrick Bamford another away-day goal midway through the half.

Everton responded and had the ball in the Leeds net on 24 minutes, but James Rodriguez’s brilliant effort from an acute angle was ruled out for a marginal offside. Moments later Michael Keane should have found the back of the net, but he could not keep his header on target after reaching James’ free-kick.

The game continued to ebb and flow, with the momentum swinging back in Leeds’ favour, but again they found Pickford in inspired form as he clawed Raphinha’s looping header off the line before Bamford fired the follow-up wide.

Mason Holgate sent a volley straight at Meslier from six yards before Everton were denied by VAR again, with Ben Godfrey penalised for interfering in play from an offside position as Richarlison’s header was chalked off.

There was still time before the half was up for Leeds to threaten again, with Harrison sending a header crashing against the post and Mateusz Klich curling a shot inches wide.

The frantic pace continued after the break with Dominic Calvert-Lewin, Klich and Allan all registering attempts on goal, before Meslier spared his own blushes by backtracking in time to keep out James’ lofted shot after the Everton forward intercepted the goalkeeper’s wayward pass from the back.

Bamford thought he had given Leeds the lead on 66 minutes when he stroked the ball home from six yards, but the linesman’s flag came to Everton’s rescue this time around, with Ezgjan Alioski offside in the build-up.

But, not to be denied much longer, Leeds finally made the breakthrough on 79 minutes as Raphinha’s crisp drive flashed through the legs of Godfrey and beyond the dive of Pickford.

Alioski and Helder Costa should have put the game to bed with glorious late chances, but the damage was already done as Leeds claimed a deserved victory that very nearly escaped their clutches.

Everton manager Carlo Ancelotti: “I don’t want to say the game was not good. The game was difficult, but with more efficiency we could have won. They got a goal at the end. We could have scored before, they could have score before. In the end they won because they got the goal first.

“We knew they played like this. In the first half we had more problems defensively. In the second half we were better and had chances. We conceded a little bit less, but at the end they scored.

Leeds head coach Marcelo Bielsa: “It was a very entertaining game. The result was a fair one. The performance of our team was a satisfactory one. It was very difficult to defend against their forwards who are very good.