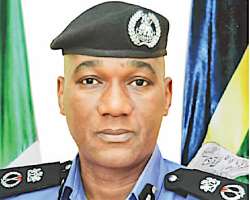 As Borno State Independent Electoral Commission (BOSIE ), is set to conduct chairmanship and councillorship Elections come Saturday, 28th November, 2020, the Borno state police command has warned all candidates and political party leaders against thuggery and other acts of violence capable of hindering the successful conduct of the elections.

A statement issued Thursday evening by the Police Command PPRO, DSP Edet Okon said “All contestants are advised to rein on their supporters/followers to avoid thuggery and other acts of violence capable of hindering the smooth conduct of the elections. "

"Furthermore, trouble makers in whatever form or guise are warned to stay away from the polling units, collation centers, INEC offices and other places of public interest.

"in view of the forthcoming local government elections scheduled to take place on Saturday 28th November, 2020 by the Borno state Independent Electoral Commission (BOSIEC), the Borno state commissioner of Police, CP Bello Makwashi wishes to assure members of the general public of the preparedness of the command and other security Agencies to provide adequate security and voting environment devoid of intimidation and violence for all law abiding citizen's. The police also used the opportunity to call on the political actors, candidates, party leaders and faithfuls to play the game by the rules, stressing that the command is poised to provide level playing ground for all contestants irrespective of party affiliations".

The statement further said ” the police and other security forces will decisively deal with deviants and other persons caught fomenting trouble or braking the electoral and other laws of the land”.

It also stated that the command calls on all eligible voters with valid PVC to come out en-mass to exercise their franchise without fear or apprehension and also conduct themselves in an orderly manner throughout the period of the exercise.

The statement also appealed for the cooperation and support of all stakeholders. The command assured of a free, fair, credible and violence-free local government elections across the state.