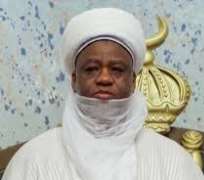 The Sultan of Sokoto, Alhaji Sa'ad Abubakar, on Thursday lamented the high rate of insecurity in the North, saying it was the worst place in the country to live.

The Sultan, who stated this at the fourth quarterly meeting of the Nigeria Inter-Religious Council in Abuja, said bandits were fast overrunning the North as residents slept with their eyes open.

The meeting had as its theme, 'Questioning for peace in the challenges of insecurity and COVID-19'

While describing the North as the worst place to live, he said that bandits had become daring.

He said they moved from house to house, village to village, market to market, with AK-47 rifles openly, purchasing foodstuffs and other items and even collecting change without any challenge from the security agencies.

The foremost traditional ruler stated that the security system in the North had completely collapsed.

He said, “Security situation in Northern Nigeria has assumed a worrisome situation. Few weeks ago, over 76 persons were killed in a community in Sokoto in a day. I was there with the governor to commiserate with the affected community.

“Unfortunately, you don't hear these stories in the media because it's in the North. We have accepted the fact that the North does not have strong media to report the atrocities of these bandits.

“People think North is safe but that assumption is not true. In fact, it's the worst place to be in this country because bandits go around in the villages, households and markets with their AK 47 and nobody is challenging them.

“They stop at the market, buy things, pay and collect change, with their weapons openly displayed. These are facts I know because I am at the centre of it.

“I am not only a traditional ruler; I am also a religious leader. So, I am in a better place to tell the story. I can speak for the North in this regard because I am fully aware of the security challenges there. We have to sincerely and seriously find solutions to the problem, otherwise, we will find ourselves soon, in a situation where we would lose sleep because of insecurity.”

The Catholic Archbishop of Abuja Diocese, Ignatius Kaigama, outlined a code of conduct for both Christians and Muslims in Nigeria.

He said, “We Christians and Muslims must avoid imposing our religious views on others or denying them public amenities, jobs or influential positions because they don't belong to our faith.

“Merit, not the vigour of our religious piety or affiliation should determine all we do or get in this country. We should not unjustly or corruptly deprive others of their rights, not to talk of wounding or killing anyone for economic or partisan political interests or because of blind religious zeal.

“It is preposterous that Nigerians clamouring for their rights and privileges from government would turn their anger on religious institutions by attacking Churches and Mosques, instigating Christians and Muslims to turn against one another or to destroy public amenities and infrastructure.

“We understand that the budget for national and state security is huge. Let us not deceive ourselves that the bigger the budget the more peace will flow. Weapons don't bring peace.

What we need is a change of attitude, a conversion of heart; an objective appraisal of the religious or ethnic indoctrination we perhaps were subjected to in schools or at home. If we are only propelled by religious interests that exclude others we shall always remain in chaos and darkness.

The President, Christian Association of Nigeria and co-Chairman of NIREC, Dr Samson Ayokunle, while thanking God for saving the nation from the COVID-19 pandemic, compared to other country, urged government to always tackle problem before it degenerated.

He asked the government to quickly reverse the recent decision to hike the price of electricity and fuel.

Ayokunle said, “That's not what we send them to do for us. The decision, evidently, has added to our pains and they should reverse it as quickly as possible.

“The development that led to #EndSARS protest was quite unfortunate, and one of that development is police brutality which ought to be addressed before now.

“We have never witnessed such a mass action in Nigeria before. People were frustrated and because those in power didn't respond appropriately until it degenerated to that level.

The Secretary to the Government of the Federation, Boss Mustapha, regretted that the nation was still faced with insecurity despite the government's efforts.

“Today, despite all efforts including the deployment of enormous resources, our country still faces a measure of insecurity which is impacting negatively on our economy, social life, education of children and young persons, investment and remains a threat to lives and livelihood,” he said. – Punch.