For The Umpteenth Time, Who Really Killed Alex Badeh & Why Are His Alleged Killers Not In Court?. 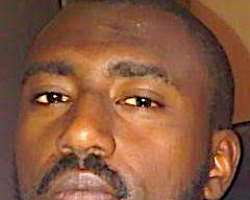 From as 'early' as 6 months after the death of immediate past Chief of Defense Staff, Air Chief Marshal Alex Badeh it was obvious something wasn't right and this is the 3rd time in 2 years I am writing to ask this question-'WHO REALLY KILLED ALEX BADEH & WHY ARE HIS ALLEGED KILLERS NOT IN COURT?. Whether or not Badeh was murdered to prevent him from disclosing the alleged shady dealings of Current Chief of Army Staff, Gen.Tukur Buratai who before becoming COAS had already bought 2 houses in Dubai while Jonathan was President or whether or not he was fed to President Buhari's alleged fulani militia, one thing is clear-Badeh died in highly suspicious circumstances.

The Police on the 27th of December 2018 said it had arrested persons in connection to the killing it didn't want to parade because it could alert the other members of the gang. Later that very same day, a video confession of one of the 5 suspects in custody surfaced. He said they waylaid Badeh on the highway, shot him and took money they had already been told he was going to purchase a new farmland with in Nassarawa. The Badeh family instantly dismissed it as a charade.They said Badeh's bank accounts had all been frozen and that his entitlements had also been stopped. His house in Abuja was littered with trash because he didn't even have money to pay the refuse company.

They went further to say someone asked him for money at his farm to buy drugs and he told the person to take some maize and sell because he was broke. That was 2 years ago. The Buhari administration has blatantly refused to prosecute those it arrested for his murder. What are they hiding?. A day after my first article asking questions was published, another new 14 persons were paraded by the Military as having been arrested in a joint operation with the DSS.They had placed an 'ongoing investigations' sign on the case to buy time but what is really complicated about a case where a suspect voluntarily confessed to killing the victim with a blow by blow account of the roles other named accomplices played?. Except of course they want the matter forgotten over time.

The noise made a while ago about prosecuting his security details and how obtaining their statements wasn't easy was a shabby attempt at evading the real issue; the self-confessed killers in custody. We were told when Badeh was killed that a friend riding with him was taken away by the killers and that he was released only after a ransom was paid. The suspect that spoke never admitted to doing that with his gang and till date, that friend hasn't been identified by anyone.

The Buhari administration has a history of protecting allies it has sacrificed. Notably Lawal Daura, the President's townsman and former DSS boss who was made the scapegoat for the invasion of the National Assembly by the DSS after foreign countries besieged the villa with calls and visits by their ambassadors to enquire if all was well. Daura had blocked the entrance to the houses of Former Senate President, Bukola Saraki and his deputy, Sen.Ike Ekweremadu just weeks earlier so the Presidency couldn't claim to be unaware of his excesses. Daura was not prosecuted and is rumoured as at this time to have moved overseas.

Then there is also the case of the first lady, Aisha Buhari's former Aide-De-Camp, ASP Sani Baba-Inna who was arrested for fraudulently obtaining N2.5bn from undisclosed persons in her name. Most people said the money was hers and that he may have been punished for getting too greedy. That much was corroborated by Baba-Inna's family members when they met with frontline activist, Deji Adeyanju. They said Baba-Inna's greed got him into trouble and that they know he even bought a house for one of her daughters in Abuja. Its been over 2 years now and nobody from the presidency or the police has told us why Baba-Inna wasn't charged to court. There, he will state his version of events and they don't want that.

The fact that a bunch of miscreants are being shielded from prosecution despite having confessed to killing an immediate past Chief of Defense Staff all but says the very powers that be are involved. As a former military man himself, Buhari ordinarily wouldn't risk the stigma amongst the military community (past and present) refusing to prosecute confessed killers of a former Chief of Defense Staff could occasion. Except of course, he knows more about the Badeh killing than his people have been made to tell us. For the third time in 2 years, WHO REALLY KILLED ALEX BADEH AND WHY ARE HIS ALLEGED KILLERS NOT IN COURT?.