Huriwa To Speaker: Take Responsibility For The Killing Of Abuja Vendor:

Demands Speaker's resignation and payment of N100 million to the family of the ASSASINATED Newspaper Vendor:
By Human Rights Writers Association Of Nigeria (HURIWA) 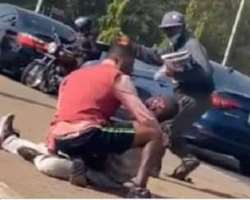 The speaker of the Federal House of Representatives Mr. Femi Gbajabiamila has been asked to take responsibility for the extrajudicial killing of Abuja Newspaper Vendor Mr. Ifeanyi Okereke by a security aide attached to the speaker just as the Rights group dismissed the tepid explanation offered by the parliamentarian on the tragic but entirely avoidable incident.

The Rights group said the Speaker is in the terrible habit of moving about and around Abuja with hundreds of people in his convoy and wonders why such a man that had his higher education and worked in a civilized Clime like the United States of America could be so power drunk and primitive as to intimidate poor residents of Abuja each time he needs to attend a function. "The other day at a five star hotel, the Speaker was seen with nearly one hundred people attending just one meeting. The fuel and human resources wasted in running the office of Speaker in the current administration is outrageous and wayward". HURIWA CONDEMNS the killing of the vendor as pure murder and has demanded for the immediate arrest, prosecution and punishment for murder of the trigger happy cop who shot and killed the Abuja Vendor.

“In management as well as in political leadership, the revered ethical principles of responsibility and accountability demands that speaker Gbajabiaila takes total responsibility for the irresponsible conduct of his personal security assistant who reports directly to him just as HURIWA says the speaker showed insensitivity and reckless lack of empathy by failing to render first aid assistance to the Vendor the moment he was shot going by the reports that the speaker allegedly asked the trigger happy security detail why he shot at the Vendor. The attempt by the speaker to spread propaganda seeking to exculpate or exonerate his person from that despicable crime is totally unacceptable."

HURIWA said also that: “Accountability in the considered opinion of intellectuals and scholars is a readiness to have one’s actions judged by others and, where appropriate, accept responsibility for errors, misjudgments and negligence and recognition for competence, conscientiousness, excellence and wisdom.” While responsibility is defined as a bundle of obligations associated with a role, accountability could be defined as “blaming or crediting someone for an action”—normally associated with a recognized responsibility. The accountable actor is “held to external oversight, regulation, and mechanisms of punishment aimed to externally motivate responsive adjustment in order to maintain adherence with appropriate moral standards of action.” The Rights group said the Speaker should and must take responsibility.

In the statement by the National Coordinator Comrade Emmanuel Onwubiko and the National Media Affairs Director Miss Zainab Yusuf HURIWA has therefore asked the speaker Mr. Femi Gbajabiamila to tender his resignation from the high office of speaker and also to ensure that the killer security detail is prosecuted and sanctioned for murder.

HURIWA recalled that the the speaker had said thus: “A horrible incident has taken place. This evening as I left the national assembly, I stopped as usual to exchange pleasantries with the newspaper vendors at the corner. Many of them have known me since I first moved to Abuja and it was a friendly exchange.Unfortunately, after the convoy set out in continuation of movement, unidentified men obstructed the convoy which got the attention of security men in the convoy who shot into the air to disperse them.

Some hours later, after getting to our destination, it was brought to my attention that someone was hit by a stray bullet, contrary to an earlier report by men in the convoy that they applied their security discretion to shoot in the air”.

HURIWA, has however faulted this line of presentation and has called for a thorough investigation of the incident just as the Rights Advocacy group HUMAN RIGHTS WRITERS ASSOCIATION OF NIGERIA (HURIWA) stated that it was almost impossible that the speaker was unaware that his security staff had killed a vendor going by the fact that he was indeed the person who stopped to allegedly offer cash gifts to the vendors who stampeded to share from his NAIRA RAIN before his security aide extra legally killed the innocent poor vendor. The Rights group said the Speaker should pay a compensation of N100 million to the family of the Newspaper Vendor that was slaughtered by a security detail working for him.