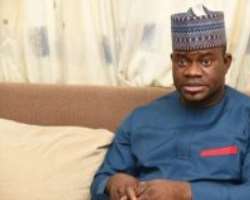 By Stephen Adeleye
The Kogi Commissioner for Health, Dr Saka Audu, has refuted the rumour making the rounds that no fewer than 50 persons had died under strange circumstances in Etteh community, Olamaboro Local Government Area of the state.

A statement by the commissioner on Wednesday in Lokoja, denied the rumour of any strange deaths.

Audu said the state has a well establish network by which disease outbreaks are reported from the community, local government levels to the state level, and therefore it was unlikely that an incident of that magnitude could go unnoticed.

“We have focal persons (informants) in strategic locations across the State who pass the information on Diseases of public Health interest to the Disease Surveillance and Notification Officer (DSNO) at the Local Government level.

”The DSNO Locsl Government then transfers this report through the DSNO (SMOH) to the State Epidemiologist who in turn brings such cases to my attention.

”By implication, we are kept abreast at all times of happenings in every part of the State. It is therefore unlikely that an incident, the magnitude as reported will pass unnoticed,” he said.

“Audu explained that when the Enugu State Commissioner for Health issued a recent press statement confirming an outbreak of Yellow Fever in his state, ”we sent a Rapid Response Team from the Kogi State Ministry of Health.

“The team was accompanied by WHO, to Ette community that shares border with Enugu State, without waiting for the usual channel of communication as a proactive measure”.

He added that when the team arrived the area on Nov. 7, they met with the community leaders, health workers, public and private hospitals and held meetings with the people, during which they conducted massive Health education on how to prevent Yellow fever from spreading.

Audu also said that the team gave out the ministry's Rapid Response toll-free lines to the people of the community, as well as Health workers and heads of institutions, to report the occurrence of any strange illness or deaths in excess of what was the norm.

”As at this moment, nobody has reached out to us. As a matter of fact, we have been having phone conversations with our contacts in that region, and there was no report of any mysterious death or outbreak of strange disease in Kogi State”, the health commissioner said.

The Commissioner stressed that yellow fever outbreak was one they were well acquainted with in the State and ever ready to tackle.

”We had an outbreak in Okoloke axis of Yagba-West Local Government area in 2017 as a result of which we vaccinated all the people in the region and adjoining communities in Kogi and Kwara States. Eventually, in 2018, we had Yellow fever vaccination for all eligible persons across the State.

”In all these, we thank our Health Development Partners and the Federal Government for their collaboration. We intend to go back to the community to vaccinate persons who may have missed out on the 2018 vaccination.

”Yellow fever vaccination offers protection for up to 10 years. Afterwards, booster doses may then be required for those travelling to areas where Yellow fever is endemic”, he said.

He allayed the fears of the people, advising them to go about their normal businesses and report any case of any strange illness or death through the dedicated Toll-free lines.

He urged the people to maintain personal and environmental hygiene, prevent mosquito bites by clearing their surroundings and drainages, to prevent water lodging around residential areas. (NAN)