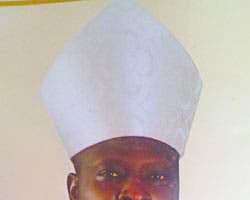 Bishop of Anglican Diocese of Afikpo, Rev. Paul Udogu, told federal government that it was playing politics with the nation’s educational system.

He said rather than playing politics with the system, it was time for the government to overhaul the education system and invest heavily in the sector.

Speaking during of 5th synod of the Afikpo Anglican Diocese held at Akanu Ibiam Federal Polytechnic Unwana, Afikpo, Udogu argued that most of the nation’s tertiary institutions look like glorified secondary schools.

He opined that there are poor infrastructures in the tertiary institutions with crowded lecture rooms with little or no furniture for students, inadequate funds for research and poor workers remuneration which he said pose serious challenge to the system.

“The introduction of Integrated Payroll and Personal Information System(IPPIS) by the federal government is a good move to curb the issue of corruption and ‘ghost workers’ in our higher institutions but the irregularities and the deficiencies in the IPPIS have not helped matters, as ASUU advocate for University Transparency and Accountability Solution(UTAS).

He urged ASUU to suspend its indefinite strike in the interest of students and survival of the nation’s education system.

“Government should listen to the cry of ASUU. We also call on ASUU to suspend the indefinite strike for the sake of the Nigerian students and for the survival of our education system. We encourage ASUU to resume work while they dialogue more with the federal government to resolve the problem.

“Government should also resolve all anomalies in IPPIS and make it more efficient and effective while UTAS integrity test should be carried out immediately”, he said.

“The implication of this borrowing is that Nigeria today and generation unborn will remain in economic slavery.

“We call on President Muhammadu Buhari led federal government to consider her borrowing culture and put Nigeria in the path of greatness by diversifying our economy.

“The diversification of our economy is sacrosanct if Nigeria must survive. The recent gas project is a good step in the right direction, but we call on the federal government to ensure that every sector and zone is included in a phased development”, Udogu said .

He proclaimed that there were lots of demons working against the progress of the country with some of the demons at the corridors of power.

“Those whom we trusted and voted to protect the integrity of our country and give us good governance, have done worse harm to the country than the known enemies to the extent that Nigeria is being considered in some quarters as a failed state”.