ASUU strike: We are going back to the negotiation table, says Ngige 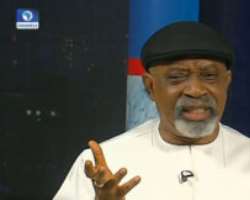 The Minister of Labour and Employment, Dr. Chris Ngige, says he will be going back to the negotiation table with leaders of the Senior Staff Association of Universities (SSANU) and other stakeholders in the education sector to ensure that the current impasse is resolved.

Speaking on Channels Television's Politics Today, Senator Ngige said he is optimistic that the disagreement with the lecturers will be resolved.

“Even if countries go to war, at the end of the day you come back to the negotiation table,” the minister said.

Ngige further stated that he will be inviting ASUU in the coming week, adding that there have been government side meetings where collations are being made to ensure that all pertinent data and pending issues are brought to the place of negotiation.

The minister said he is very optimistic that with the myriads of options available, the matter will be resolved next week.

ASUU had asked the Federal Government to adopt the University Transparency Account System (UTAS), rather than the Integrated Payroll and Personnel Information System (IPPIS), for the payment of lecturers' salaries and allowances.

The Minister of Labour and Employment, Dr Chris Ngige, disclosed the position of NASU and SSANU to reporters on Thursday at the National Assembly complex in Abuja, the nation's capital.

“There are other unions in the university system that are saying they will develop their own system, and that they are not going to go on to UTAS – Senior Staff Association of Universities (SSANU), Non-Academic Staff Union of Universities (NASU), National Association of Academic Technologists (NAAT), … ASUU is not the only union in the university,” he told journalists after defending the budget of his ministry in the Senate.

Ngige stated that the government was making effort to meet up with ASUU's demands but warned against the use of different payment platforms in Nigerian universities.

He stressed that it was important for the government to ensure that the concerns of SSANU, NASU, NAAT, and others were addressed while working to ensure the return of the lecturers to the classroom.

The minister, however, hinted that the payment system proposed by ASUU had been forwarded to the National Information Technology Development Agency (NITDA) for assessment.

“It has happened before, entry gates into the universities; we don't want that to happen. That is why we are taking them holistically and going in measure steps to be sure that we carry everybody along.”

ASUU has been on strike for nearly seven months and one of the union's demands is to have its own payment system separate from the government's IPPIS.

Several meetings between the union and the government have ended without a definite conclusion, raising concerns on the part of students who have been out of the classroom since March. (Channels TV)