Whole world must benefit from COVID-19 vaccine: WHO 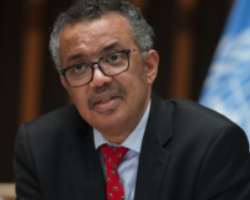 The head of the World Health Organisation hailed the rapid progress towards a Covid-19 vaccine but insisted Friday that every country must reap the benefits.

“A vaccine will be a vital tool for controlling the pandemic, and we're encouraged by the preliminary results of clinical trials released this week,” Tedros Adhanom Ghebreyesus said, in closing the WHO's annual assembly.

US pharmaceutical giant Pfizer and its German partner BioNTech announced Monday that their candidate vaccine had proven 90 per cent effective in ongoing final phase trials involving more than 40,000 people, less than a year after the novel coronavirus emerged in China.

“Never in history has vaccine research progressed so quickly. We must apply the same urgency and innovation to ensuring that all countries benefit from this scientific achievement,” said Tedros.

The coronavirus has killed nearly 1.3 million people worldwide while more than 52.7 million cases have been registered, according to a tally from official sources compiled by AFP.

However, the tallies probably reflect only a fraction of the actual number of infections. Many countries are testing only symptomatic or the most serious cases. Shared pathogens lab plan

Tedros said the pandemic had shown there was an urgent need for “a globally-agreed system for sharing pathogen materials and clinical samples”, to facilitate the rapid development of Covid-19 vaccines, diagnostics and therapeutics as “global public goods”.

He said the system could not wait for bilateral agreements that could take years to negotiate.

“We are proposing a new approach that would include a repository for materials housed by WHO in a secure Swiss facility; an agreement that sharing materials into this repository is voluntary; that WHO can facilitate the transfer and use of the materials; and a set of criteria under which WHO would distribute them,” said Tedros.

The UN health agency's director-general thanked Thailand and Italy for offering to provide materials and pioneer the new approach, and Switzerland for offering a laboratory.

WHO member states on Friday approved a resolution on strengthening preparedness for health emergencies.

The resolution calls on countries “to prioritise at the highest political level the improvement of, and coordination for, health emergency preparedness.”

It also urges countries to continue developing their capacities for detecting infectious diseases, in compliance with the International Health Regulations.

The regulations on global health security, approved in 2005 and entering into force two years later, notably regulate how a public health emergency of international concern (PHEIC) is declared. Sounding the alarm

They also include specific measures to be implemented at ports, airports and border posts in order to limit the spread of risk.

Several voices were raised questioning the effectiveness of this process in attempting to prevent or rein in the Covid-19 pandemic.

Washington accused Tedros of being too slow to declare a PHEIC over the new coronavirus. The WHO chief himself has been critical of its binary on-or-off nature, with no levels of alert in between.

The resolution adopted on Friday asks Tedros to seek possible “complementary mechanisms” that could be used to alert member states “about the severity and/or magnitude of a public health emergency in order to mobilise necessary support and to facilitate international coordination”.

He is expected to deliver his ideas at the next WHO annual meeting.

Besides discussing the pandemic, the WHO assembly agreed on a new plan to defeat meningitis by 2030; increased action on epilepsy and other neurological disorders; and a strategy to speed up the elimination of cervical cancer as a public health problem.