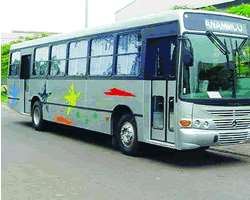 Anammco mass transit bus
Newspaper advertisements early in the week by Urban Development Bank of Nigeria Plc inviting bids from 'dealers' and 'franchise holders' to apply to access the revolving fund for the new Public Mass Transit Scheme managed by the specialised bank, has drawn the ire of vehicle manufacturers in the country who have appealed to the Federal Government to ensure that the Nigerian plants are challenged with the responsibility of providing the required vehicles.

In a protest letter to the Minister of Finance on Wednesday, the Nigerian Automotive Manufacturers Association (NAMA), listed no fewer than 12 automotive plants in the country that have the capacity to produce buses of various sizes, as well as other vehicles, and wondered why they were not given priority to build and supply the models needes for the new transit scheme.

The letter signed by the Executive Secretary of NAMA, Mr Arthur Madueke, also argued that if allowed to stand, the Urban Development Bank's preference for dealers as suppliers of the vehicles would run contrary to the current strenuous effort by government through Vice President Namadi Sambo, to revive the auto industry, which it said is recognized as a strategic sector by all developed and developing economies.

Listed among the auto plants in Nigeria that have been yearning for huge patronage such as the one the Urban Development Bank is inviting bids for, are : PAN Limited, Kaduna; National Truck Manufacturers, NTM, Kano; Steyr Nigeia Limited, Bauchi; MB-ANAMMCO, Enugu; Innoson Vehicle Manufacturing Company Limited, IVM, Nnewi; and GM Nigeria, Lagos.

Others are BUSAN-Leyland, Ibadan; Autobhan Techniques Limited, Lagos; BUREM, Kaduna ; and Addis Engineering Limited, Lagos. The plants, according to the letter, 'produce cars, light commercial vehicles ranging from pick-up trucks to buses with capacity of 15 to 30 (passengers), and heavy commercial vehicles consisting of trucks and luxury buses capable of accommodating 50 and above passengers'.

NAMA also drew the attention of the Finance Minister to the Federal Government Gazette No 28 of 1993, 'directing that all tiers of government and their agencies must first of all patronise vehicles made and assembled in Nigeria. Shortfalls would then be made up through special arrangements. The objective is to grow the Nigeria automotive industry.

The gazette is still in force, but has been adhered to in abeyance due to personal reasons'.

The management of the Urban Development Bank had in the advert described the Public Mass Transit Revolving Fund as a creation of the Government meant to address the problem of transportation in the country through the provision of vehicles to identified transport operators/group s at concessionary interest rates which shall be used to run the Public Mass Transit Scheme. It went on to call for bids from interested and qualified vehicle dealers.

This, the local auto makers argued, is not patriotic enough and defeats the objective of Vision 20/20, which is to make Nigeria a developed nation by the year 2020. Reacting to the advert, the Managing Director of GM Nigeria, Mr Tony Arenyeka, said 'it is a pity' that a huge opportunity to boost activities in the nation's auto manufacturing sector is about to be diverted to Japan, China and other countries from where fully built buses flood the Nigerian market.

Arenyeka recalled that in the 80s and up to the 90s, Nigerian plants satisfied the market demands with good quality buses, including those used in the FUMTA-managed scheme introduced by the Gen Ibrahim Babangida government, but lamented that these auto makers are presently in bad shape due to lack of patronage. He, therefore urged the government and the Urban Development Bank not to look at the present scheme merely from the consumer perspective, but as a programme for sustained development of the auto sector, which will have multiplier effects on the economy.

Also reacting, Chief Innocent Chukwuma, Chairman of Innoson Group, owners of the Nnewi-basd Innoson vehicle plant which produces a wide range of buses, from small models to luxury mass transit carriers, assured that the plants in the country have all it takes to make vehicles that can do better than fully built imported ones.

'What I want to advise government to do is to place the orders for the buses with the Nigerian bus makers, and there are big advantages in doing this. One is availability of spare parts and easy maintenance. The Nigerian auto maker will always be here, and he knows that if he does not do well in terms of maintenance and spare parts, it will not be good for his business'