#endsars: Huriwa To Cbn Governor : You Are Terrorized By The Truth: 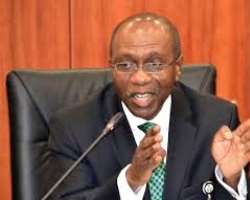 The foremost Civil Rights Advocacy Organization:- HUMAN RIGHTS WRITERS ASSOCIATION OF NIGERIA (HURIWA) has carpeted the governor of Central Bank of Nigeria. Mr. Godwin Emefiele for equating promoters of the Civil Rights protests against police brutality known as #ENDSARS with terrorists just as the Rights group said the CBN governor who is a puppet and a stooge of President Muhammadu Buhari is tormented and terrorized by the truth.

The Rights group said the CBN GOVERNOR through his ineptitude and crass incompetence has driven the value of the nation's national currency to hover around the same vicinity of disgrace and ignominy with the worthless wheelbarrow Zimbabwean currency because the hierarchy of the Central Bank of Nigeria has been running the regulatory institution just like the General Idi Amin of Ugandan military dictatorship of the 1970's and so has failed to effectively put measures in place to boost the global standing of the Nigerian National currency.

Besides, HURIWA has asked the Special Assistant to President Muhammadu Buhari on Media Mr. Garba Shehu to return to a good School to learn lessons about the essence, import, significance and eternal values of constitutionalism and democracy so he understands that peaceful protests by citizens against the misconduct of the members of the policing institution of Nigeria are lawful, constitutional and indeed Protests are necessary obligation of active citizenship which the Nigerian Constitution by admonishing citizens in Section 14 (2) (c) thus: "The Participation by the People in their government SHALL BE ENSURED in accordance with the provisions of this Constitution ".

The Rights group said the Media assistant to President Muhammadu Buhari Garba Shehu was bereft of deep knowledge of the workings of constitutional democracy which was why he told a television station that citizens who participated in the peaceful marches against police excessive deployment of force and the deployment of extrajudicial killings of civilians as policing techniques would in his warped imagination face the consequences of their action. "For the avoidance of doubts, Mr. Garba Shehu needs to be told that democracy without peaceful protests is dead just as the Constitution in chapter 4 permits the citizens to demonstrate constructively against oppressive styles of governance because ultimately the ownership of the Sovereignty of Nigeria belongs to the people of Nigeria from where office holders derive the legitimacy to exercise lawful authority in line with the Constitution (Section 14(2) (a))."

HURIWA lambasted the CBN GOVERNOR for deviating from his core duties and statutory obligations thus: “We have followed the unfortunate trajectory of attacks and the well orchestrated affronts’ against constitutionalism by the central Bank of Nigeria’s governor Mr. Godwin Emefiele, and his extreme availability to be used by President Buhari as a puppet to witch hunt Civil Rights campaigners. The latest antics of the CBN to freeze the accounts of some Nigerian citizens based on an ex- parte motion before a court that at best behaved like an agent of President Buhari is sad, shocking, unfortunate, unpatriotic and despicable.

The attempt by the central Bank to justify these cocktails of illegality against civil and peaceful protesters is another low side in the plots by the current government to set up a totalitarian regime which is offensive to the constitution.”

“What Mr. Godwin Emefiele and the Federal High Court did by freezing bank accounts of citizens illegally and through the backdoors without fairness, equity and justice, only because they participated in a lawful and constitutionally sanctioned civil protects, shows that the hierarchy of the Central Bank of Nigeria has abandoned the core mandates of the Chief Financial regulator of the economy but has deviated and dived into the arena of the muddy water of politics.”

“We condemn this court of jesters for agreeing to freeze citizens legitimate means of livelihood for six months without extending the constitutional courtesy of fair hearing to them as provided for by section 36 (5) of the 1999 constitution. We are compelled to think that the conscience of the governor of CBN (if has any) is tormented and terrorized by the truth which is why his team of lawyers made their irrational accusations that peaceful protesters are terrorists.”

HURIWA listed Constitutionally mandated provisions guaranteeing peaceful protests in Nigeria thus: 39.-(1) Every person shall be entitled to freedom of expression including freedom to hold opinions and to receive and impart and information without interference.

40. Every person shall be entitled to assemble freely and associate with other persons, and in particular he may form or belong to any

Political party, trade union or any other association for the protection of his interests:

42.-(1) A citizen of Nigeria of a particular community, ethnic group, place of origin, sex, religion or political opinion shall not, by reason only that he is Such a person

(a) be subjected ether expressly by, or in the practical application of, any law in force in Nigeria or any executive or administrative action of the government, to disabilities or restrictions to which citizen of Nigeria of other communities, ethnic groups places of origin, sex religions or political opinions are not made subject: or

(2) No citizen of Nigeria shall be subjected to disability or deprivation merely by reason of the circumstances of his birth."

Specifically, HURIWA condemned the illegal confiscation of the financial entitlements of Citizens by the CBN through an irregular court order as a violation of Section 44.-(1) of the Constitution which provides that: "No moveable property or any interest in an immovable property shall be taken possession of compulsorily and no right over or interest in any such property shall be acquired compulsorily in any part of Nigeria except in the manner and for the purposes prescribed by a law that, among other things –

(a) Requires the prompt payment of compensation therefor; and

(b) Gives to any person claiming such compensation night of access for the determination of his interest in the property and the amount of compensation to a court law or tribunal or body having jurisdiction in that part of Nigeria."

HURIWA recalled that the Army in a written address in support of a motion ex parte filed by the CBN saying the funds in the accounts might have emanated from terrorist activities.

The apex bank had received a court order to freeze accounts of 19 individuals and one company that coordinated some parts of the #EndSARS protest.

HURIWA recalled that the peaceful protests lasted for 13 consecutive days in various parts of the country and was eventually hijacked by hoodlums paid by government agents which led to the destruction of properties and businesses.

HURIWA recalled that In the case with suit number FHC/ABJ/CS/1384/2020, filed before A.R. Mohammed, the CBN did not make reference to the fact that the 20 accounts were owned by personalities involved in the #EndSARS protests.

“My lord, the nature of the transactions undertaken through the defendants’ accounts are of suspected terrorism financing in contravention of Section 13(1)(a)and(b) of the Terrorism (Prevention)(Amendment) Act, 2013 and Regulation 31(2)(a)and (3)(b) of the Central Bank of Nigeria Anti-Money Laundering/Combating the Financing of Terrorism Regulations, 2013,” the written address read just as the CNN in a supporting affidavit deposed to by Aondowase Jacob on behalf of the CBN as claimed that Joseph Omayuku, head of the economic intelligence unit of the CBN governor’s department, had conducted an investigation on the accounts which showed that the owners of the accounts may have been involved in terrorist activities.

HURIWA condemned this systematic clampdown on civil protesters as an attempt to bring about a totalitarian regime which the Rights Advocacy group HUMAN RIGHTS WRITERS ASSOCIATION OF NIGERIA (HURIWA) has tasked all right thinking Citizens to resist by every means legitimate.