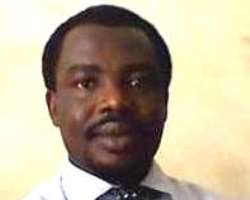 They went to the Bricks House as Five Wise men
from the East, but exposed that wisdom can't be imparted.

Politics became their keyword when corpses
cry from places disclosed and undisclosed.
Two graves were dug: One with soldiers' guns and two,

with the lies from men from the East.
Knowledge was communicated by the men, and
wisdom was bereft in their speech.
They extolled hypocrisy
exceeding the limit of sycophancy.
This is not the way to show revenge, and
their journey has left a path of unwise statements.

Anyone who swallows abomination
shall vomit it someday. You don't swallow aru.
(c) ODIMEGWU ONWUMERE
Nov. 10 2020