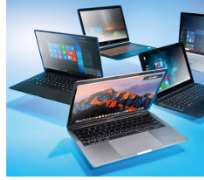 After enjoying a run of uninterrupted supply of personal computers (PCs), laptops and other digital devices for nearly a quarter of a century, the world is currently in the middle of a major supply chain crisis that has seen global manufacturers struggle to meet growing demand.

The situation is exacerbated by the coronavirus pandemic, a global health challenge that began in late 2019, spreading from Wuhan, China where it originated to virtually all corners of the globe.

With the onset of the pandemic, supply of laptops, PCs and other hardware components had taken a huge bashing. Global data released two weeks ago shows that most major global computer OEMs are unable to supply five per cent of orders placed and paid for by distributors and this has skyrocketed retail prices of PCs and laptops. In Africa, and particularly in Nigeria, consumers are paying higher prices to secure few available units in the market. It is speculated that things may not improve until mid-next year.

This is hardly surprising as China, the original epicenter of the pandemic, had for a while now, become the world’s leading manufacturing hub. Consequently, the lockdowns occasioned by the pandemic had seen a breakdown of China-based global computer supply chains, delaying the arrival of computers and laptops in shops across the world.

Earlier in 2020, specifically in March, a report in the Financial Times indicated that retailers were told that it is taking up to three times as long for PCs and parts to be delivered. Industry experts said that only those brands able to pay upfront and work closely with component suppliers, such as Apple and Samsung, would be able to secure enough production capacity, as shortages rippled through the supply chain.

“One channel partner in Australia was notified by key manufacturers that shipments can take up to 14 weeks, as opposed to the normal four weeks,” said Sharon Hiu, an analyst covering sales and distribution channels in Asia-Pacific at Canalys, the technology research firm. “Some channel companies have been given a 10-week estimate, while others have not been able to get a projected time of arrival at all.”

Indeed, no major OEM was left out.
Research showed that shipment times for Dell computers to Australia were extended from the usual three to five weeks to 10 weeks. Notebooks and desktop computers of HP’s Elite series had run out of stock in some shops. In Nigeria, Zinox, a local computer manufacturer and one of Sub-Saharan Africa’s major players, was experiencing delays of up to nine weeks in taking delivery of essential hardware and other components.

With the gradual lifting of the lockdowns in many parts of the world around May, many heaved a sigh of relief as factories began reopening in China and other countries. However, supply chain experts had warned back then that the effects of the shutdown will linger because the disruption had resulted in shortages of components which only gradually become visible.

Currently, that prognosis is proving to be true.
In addition to fears of a predicted second wave of COVID-19, many global manufacturers are battling to meet five per cent of demands for PCs and laptops. The foregoing has seen estimates for PC shipments this year revised to reflect the current state of scarcity. Tech experts expect global PC shipments this year to drop by over 34 per cent in a best-case scenario and 45 per cent in a worst-case scenario.

Why is the global demand for PCs and laptops overshooting supply so much even in the tail-end of 2020?

The reason is hardly far-fetched. Apart from the lingering disruption of supply chains occasioned by the lockdowns, the world has also seen a rise in the adoption of virtual learning or at-home schooling by educational institutions. Also, many corporate organizations have also embraced virtual work or meetings, encouraging more staff and business partners to leverage tech tools to navigate the current health challenge.

The foregoing scenarios have seen demands for PCs and laptops sky-rocket across the globe. Further, it has pushed the personal-computer market to its strongest demand growth in more than a decade, according to third-party analyses released by Gartner and IDC in late October. However, OEMS are unable to mop up the demand which is expected to see scarcity carry on into the latter part of 2021.

“Consumer demand and institutional demand approached record levels in some cases,” disclosed Jitesh Ubrani, a research manager for IDC. “Gaming, Chromebooks, and in some cases cellular-enabled notebooks were all bright spots during the quarter.”

The report also pointed to a paucity of supplies to continue feeding the increased demand for PCs, with panels and processors mentioned as especially in demand.

“The PC industry rode into the third quarter with a sizeable backlog of unfulfilled orders. And it appears the quarter will end under the same auspices,” Linn Huang of IDC said in a statement. “Given that the shortages have been due more to a shortfall of business planning than a technical glitch, we do not anticipate a sudden surge in capacity. Consequently, this backlog will likely carry into 2021.”

Both companies reported that Lenovo Group Ltd. 992, +0.74% had the strongest market share among PC manufacturers in the quarter, topping HP Inc. HPQ, +0.62%, but the Chromebook discrepancy showed up in those numbers as well. Gartner credited Lenovo with 25.7% of the market and HP 21.6%, but HP’s Chromebook sales made the race much tighter — 23.7% to 23% — in IDC’s results. Both companies had Dell Technologies Inc. DELL, +0.12% third in the market-share rankings, followed by Apple Inc. AAPL, -0.11% and Acer Inc.

In Nigeria, Africa’s biggest market, many corporates and educational institutions are technically in trouble as the scarcity is taking a huge toll on their budget. As one technology enthusiast said in a virtual conference last week, “in the 21st century, when you wake up late, you definitely shall pay the price for lateness.’’

However, it remains to be seen how the world will cope in the face of a supply challenge that experts predict will last till June 2021.