Charges Media Houses To Stop Being Used For Propaganda By Humanitarian Affairs Ministry: 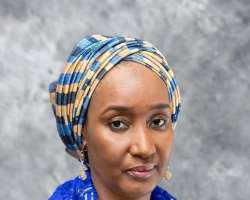 Prominent Civil Rights Advocacy group HUMAN RIGHTS WRITERS ASSOCIATION OF NIGERIA (HURIWA) has asked the Minister of Humanitarian Affairs and Disaster management Sadia Umar Faruq to stop her wild goose chase of attempting to tie a wool around the eyes of gullible Nigerians by trying to use the massive looting of COVID-19 LOCKDOWN palliatives by hungry and desperate Nigerians to justify her unsubstantiated claims that her ministry can't be called out for investigations over alleged corrupt practices.

In a statement by the National Coordinator Comrade Emmanuel Onwubiko and the National Media Affairs Director Miss Zainab Yusuf, HUMAN RIGHTS WRITERS ASSOCIATION OF NIGERIA (HURIWA) accused the Minister of Humanitarian Affairs and Disaster management of being 'clever-by-half' by trying to assert that contrary to the well known position that the foodstuffs stored in the WAREHOUSES that were looted in the wake of the disrupted #ENDSARS PROTESTS in the Country were donated by the Private sector and therefore has nothing to do with what measures the Nigerian government deployed public funds to procure foodstuffs and relief materials for poor Nigerian homes, but however the Minister of Humanitarian Affairs and Disaster management has attempted to claim credits for those foodstuffs that were looted and to assert that she has forgiven her 'Traducers' who had demanded accountability and transparency from her ministry.

HURIWA has in a statement wondered why the Nigerian Media that ought to set agenda and be at the forefront of vigilant Nigerians that should be taking the government officials to render accounts of how they spent the public funds in their custody during the lockdown but sadly the media has allowed politician to try to sell dummy and totally unprovable claims through their media just as the Rights Advocacy group HUMAN RIGHTS WRITERS ASSOCIATION OF NIGERIA (HURIWA) maintained that the foodstuffs looted by hungry and desperate Nigerians in much of the state's around the Country were wholly donated by a private sector coalition against the coronavirus, known as CA-COVID,which had collected tens of millions of dollars' worth of aid for coronavirus victims and given it to the government. But many state authorities have halted distribution of the aid since the easing of lockdowns. Some Nigerians accuse authorities of hoarding items while millions of people experience hunger.

HURIWA carpeted the Minister of Humanitarian Affairs and Disaster management Sadia Umar Farouk for attempting to tie a wool around the eyes of gullible people in the Country by justifying the way she has discharged her responsibility in what is a clear propaganda that lacks practical believability since the FOODSTUFFS IN THOSE WAREHOUSES LOOTED WERE DONATED BY CORPORATE ORGANIZATIONS AND THEREFORE ARE DISTINCT FROM THE COMPONENTS THAT WERE DISTRIBUTED BY THE FEDERAL GOVERNMENT THAT WERE PROCURED USING PUBLIC FUND even as the Rights Advocacy group HUMAN RIGHTS WRITERS ASSOCIATION OF NIGERIA (HURIWA) reminded the minister of Humanitarian Affairs and Disaster management and her intellectually lazy media spun doctors that even the governors who hoarded these foodstuffs donated by these companies for onward distribution to the hungry masses of Nigeria have openly admitted that what were looted wete never donated by the Federal government but by the organised private sector. The Nigeria Governors' Forum (NGF) few days ago said the looted items in warehouses in some states were being held for vulnerable people, not hoarded. HURIWA then wondered why the Humanitarian Affairs minister is being clever by half by claiming that those looted foodstuffs were donated by government or that the fact that there were foodstuffs hoarded and then looted by hungry Nigerians showed that those who accused her of corruption were mischievous and that she has forgiven them.

HURIWA recalled that the Minister of Humanitarian Affairs, Disaster Management and Social Development, Hajiya Sadiya Umar-Faruk, says she has forgiven those who accused her of hiding COVID-19 palliatives meant for the poor.

She stated this while fielding questions from journalists in Gusau on Monday in Gusau.

“I am aware many people have made various spurious allegations and accusations against my person and my ministry over the way we distributed Federal Government palliatives to cushion the effect of COVID-19.

“I have always said I am carrying out my duties and responsibilities to the best of my ability and with fairness to all parts of the country.

“Now that they have realized their mistakes, l will only pray to God to forgive us all,” she maintained.

HURIWA blasted the Minister for trying to use subterfuge and to try to confuse the facts in issue about the manner her ministry spent public fund in the implementation of the School Feeding PROGRAMME and the SOCIAL INVESTMENT PROGRAMME just as the Rights group faulted this line of arguments by the Minister and her hireling who try to exonerate her ministry of all accusations of corruptions. HURIWA stated clearly that the HUMANITARIAN AFFAIRS MINISTER must be ready to render public account of how her ministry went about distributing food reliefs to the so called shook children when all the Schools in Nigeria were shut down during the 4 Months of lockdown.

" HURIWA wishes to remind the HUMANITARIAN AFFAIRS MINISTER that the federal government says it spent about N523.3 million on school feeding programme during the coronavirus induced lockdown just as HURIWA reminded the Minister of Humanitarian Affairs, Sadiya Farouq, that she made the disclosure during the Presidential Taskforce briefing on COVID-19 in Abuja.

Ms Farouk said about 124,589 households benefited across the FCT, Lagos and Ogun states.

HURIWA recalled that the Army the minister spoke against the backdrop of allegations of corruption in the social intervention programmes. Many Nigerian on social media have been calling on the federal government to identify the vulnerable members of the population benefiting from the palliatives and the process used for the selection and distribution.

"HURIWA wonders how this minister seeks to tie a wool around the eyes of over 200 million Nigerians to confuse us into believing that her ministry is populated by Angels when she is mixing up the facts including the inherent and self evident truth that the foodstuffs looted from states by hungry and desperate Nigerians were actually donated by CORPORATE ORGANIZATIONS AND not by her ministry and that indeed the donations were made through the Central Bank of Nigeria and the accountant General of the Federation told Nigerians that the Presidential task Force on Covid-19 was responsible for making sure that these items reach the intended beneficiaries and the Presidential task Force on Covid-19 is headed by the Secretary to the Government of the Federation and not the Minister of Humanitarian Affairs and Disaster management. So what is the nexus between what the Private sector donated and were shared to states with what the ministry of Humanitarian Affairs and Disaster management coordinated under the SOCIAL INVESTMENT PROGRAMME and the SCHOOL FEEDING PROGRAMME? The minister told Nigerians that she fed school children when the whole schools were on lockdown but now she is saying anything thing altogether as if to say those school children she fed no longer exists but that indeed the foods she claimed to have distributed to 'school children' when no schools were opened, were actually hidden in warehouses. This is incredible. Has the minister forgotten that even the lackeys in the National Assembly had also called for a total review of the process while state governors also urged President Muhammdu Buhari to reform the process of the distribution of the palliatives? Why is the Minister bringing confusion so as to run away from demands for accountability?

HURIWA recalled that the minister said the Home Grown School Feeding Programme was modified and implemented in three states following the presidential directive on March 29 just as Ms Farouq had announced that children in primary 1 to 3 in public schools participating in the feeding programme across 3.1 million households are targeted to benefit from the Covid-19 palliatives in the country. She also said the federal government would only provide vouchers to the beneficiaries who would be given only “uncooked” food items.

“It is critical at this juncture to provide details that will help puncture the tissue of lies being peddled in the public space.The provision of ‘Take Home Rations’, under the modified Home Grown School Feeding Programme, was not a sole initiative of the MHADMSD.The ministry, in obeying the presidential directive, went into consultations with state governments through the state Governor’s Forum, following which it was resolved that ‘take-home rations’, remained the most viable option for feeding children during the lockdown.So, it was a joint resolution of the ministry and the state governments to give out take-home rations."

HURIWA has therefore called on the Humanitarian Affairs minister to make herself available for public debate so Nigerians are told how the School Feeding PROGRAMME she said she did during Lockdown has suddenly found justification in the looted foods from the WAREHOUSES of COVID-19 PALLIATIVES donated by the Organized Private Sector which governors out of greed and avarice hoarded in Warehouses and left their populations to suffer unrelenting hunger and malnutrition.