“Apart from the known and the unknown, what else is there?” Harold Pinter, The Homecoming, 1965 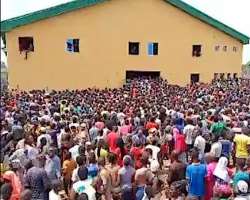 Some days back I was a guest to the “association of free newspaper readers” at a popular Newspaper vendor in town, to as usual sample the opinion of the ordinary Nigerian. It was a discussion of life full of its difficulties and obstacles, such that I wondered what actually our leaders have done for the nation. Loads of all kinds of perception.

The President speaking to the Sultan and others said they were addressing the concerns of youths, the youths on the other hand don’t believe, so they and we all are still on the edge, they (youths) want to soro soke (Speak up, and speak loud).

Recall we were told we had the capacity to borrow, as we took more of the Chinese pill called loans, lately we are even borrowing from Brazil, but again another politician who should know says that we are reaching our maximum capacity to borrow, before we come screaming perception, the fact is that we don’t see value for borrowed money, and yet they will tax us some more.

It is not unreasonable to argue that there is no such thing as reality-only the individual’s perception or interpretation of reality, the known and the unknown. That is why I always add that part of Nigeria’s problem lies in perceptual differences. Because over the years the leadership of the nation has not made any effort at giving us a strong positive perception of who they are, answer correctly the questions that cause the present dysfunctional perception that the experiment called Nigeria has become, what they have achieved for us as a country and who we are as Nigerians.

The significance of individual differences is particularly apparent when focusing on the process of perception. We all see things in different ways, we all have our own, unique picture or image of how we see the ‘real’ world. Most of us do not passively receive information-we analyze and judge it, one Prince Charles Dickson, one you, ‘one it’ and one ‘them’. We all have our own world, our own way of looking at and understanding our environment and people within. For example a small HONDA utility car may be expensive to some of us, while for a Senate President an over 30million Naira car is just OKAY in a nation where people live on less than a dollar a day, and a product that is user friendly may be seen as too simplistic and basic for another, or just like we could not agree on how to classify looters and looting, hoodlums and protesters, or re-looting the loot.

For our leaders and politicians, an understanding of perception is essentially important so as to ensure that they are aware of problems, which can arise from the process of perceptual selectivity. However, as has always been the case, the leadership careless about the perceptions the led have of them and their ‘people-antagonistic’ policies. It’s the same I do not care attitude, and nonchalant what can they do stance that has brought us to this point of indecisive crossroads. The perception process of the ruler-ruled class is disorganized instead of being innately organized and patterned.

The poor masses perceive the leaders by attributive characteristics, like no matter what the EFCC does, why are the likes of Mr. XYZ, or Mallam ABC walking free…if the ordinary recruit in police uniform is a thief, We have seen thieving officers proving the bigger the better, any how you see it. The ordinary Nigerian judges the behaviour and intentions based on past knowledge and compares with the examples they have seen. The principles of perceptual difference reflect with a tilted balance to one side of negative government action on matters that affect the masses and positive action when it affects the power players and this will continue to remain a source of problem.

One of the major perception dances is that of communication-often than not a thief steals secretly. Naturally when government and leadership do not carry followership along, we breach the law of learning via knowledge and forget that communication and perception are inextricably bound. When there is no communication-the rumour mill works extra and over time, it thrives, everything the government does is suspicious. In Nigeria we abuse transactional analysis, as the dynamics of interpersonal communication between the government and the populace is not exploited, instead we transact communication based on lies, half truth, propaganda-so the knowledge to deal with potentially difficult situations is non existent or at best adulterated.

For example, was there a massacre in Lekki, was the army there and who called them in, how many persons died, who owns, or runs the tollgate, have become science experiments, what you concoct is what you get.

The perception of Nigeria has suffered from features, which have given rise to perceptual distortions or erroneous stereotyping, halo effect, and continuous perceptual defence. The perceptual process is selective and subjective. This has taken us very backward, because in some cases we simply are stereotypical and then on the other hand the whole matter is subjected to a halo effect, taking a stand just because of one simple favourable or unfavourable action or inaction of the government or the populace.

The Buhari administration has engaged itself on perceptual defence through its tendency to avoid or screen out certain stimuli that is perceptually disturbing or threatening. Like corruption, education, and more are tantamount to grandstanding, a tendency to select information, which is supportive of their point of view and choosing, not acknowledge the truth or contrary information.

We truly have a misbalanced social situation further helped by an inexperienced political field-so there is inconsistency of action causing a possible manipulation of perception at the slightest edge-thus as much as there never will be one perception, there is never a large perception of positivity regarding government action. So we have to stereotype often despite the dangers inherent in doing so. However can we all be wrong?

It hurts to see a nation so touted to be the heaven of all manner of potentials suffer in the hands of a (s)elect few who refer to themselves as politicians and leaders. The issue is that we are beginning to get to a stage where our problems have become over flogged to the point the problem is now us.

Take for example, I know of a State that has 23 Ministries, another one has a Commissioner of Information, Director of Press, Deputy Director of Press, Personal Assistant on Public Relations, Senior Special Assistant on Media, Adviser on New Media and then a Media Consultant. Are they all political jobbers, or they are persons working towards a great state, all perception.

I am not an unrepentant pessimist or see no-good critic, Politics is dirty but then there is principle, integrity, and like it is said, honor exists amongst thieves. In Nigeria we have suitcase-carrying politicians, professional politicians. No plan, or focus except a strong objective to loot. That is why a man born in Lagos, grew up in Lagos, works in Lagos, is elected into office and the next thing he embarks on a familiarization tour of his very own backyard.

So who is wrong, ASUU or Federal Government, is it all really just about a payment platform and failed promises or more about an ailing or failed educational sector, Policemen were killed, and yes, very wrong, but should we leave public spaces to criminals or vigilantes. Northern governors and social media, Northern citizens and insecurity, congratulating Americans with Nigerian roots for getting elected into positions in the US while we battle indigene and non indigenes, natives and non natives, restructure and power devolution. Godfathers and godson gladiators in politics

Perception, we have a thieving government and likewise stealing populace, each with a perceptual difference as to his/her reason, but the truth is that it is slowly and steadily killing the nation. Will Allah help us out of the depths of disgust, which we are falling into daily—Only time will tell