Joe Biden, now president-elect, declares it is 'time to heal in America' 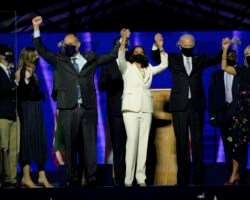 In his first speech as president-elect on Saturday, Joe Biden said he hoped to unify the nation after an especially bitter campaign with President Trump, who has so far refused to concede defeat in the race.

“Folks, the people of this nation have spoken,” Biden said on an outdoor stage at the Chase Center in Wilmington, Del., as a crowd, with many people watching from inside their cars, honked and cheered approval. “They've delivered us a clear victory, a convincing victory, a victory for we the people. We won with the most votes ever cast on a presidential ticket in the history of the nation, 74 million!”

The former vice president repeatedly sought to reinforce his message during the campaign that he would seek to be a president for all Americans, regardless of whether they had voted for him.

“I pledge to be a president who seeks not to divide, but unify. Who doesn't see red states and blue states, only sees the United States,” Biden said.

“All those of you who voted for President Trump, I understand the disappointment tonight. … But now, let's give each other a chance. We need to stop treating our opponents as our enemies,” Biden told the crowd. “They're not our enemies. They're Americans. This is the time to heal in America.” President-elect Joe Biden speaks in Wilmington, Del., on Saturday. (Andrew Harnik/Pool via Reuters)

Biden was declared the victor in the particularly caustic race against President Trump on a date that holds personal significance for the Democrat: It was 48 years to the day that he was first elected to the United States Senate in his home state of Delaware.

Biden ran two failed campaigns for president — one in 1988 and the other in 2008. He served eight years as vice president under President Barack Obama from 2009 to 2017, and then, on his third try, he crossed the finish line.

As several major news networks called the race in Biden's favor late Saturday morning , Trump was playing golf at his club in Sterling, Va. The president vented his frustration on Twitter, continuing his attempt to discredit Biden's victory by arguing that voting irregularities had robbed him of the presidency.

“THE OBSERVERS WERE NOT ALLOWED INTO THE COUNTING ROOMS. I WON THE ELECTION, GOT 71,000,000 LEGAL VOTES. BAD THINGS HAPPENED WHICH OUR OBSERVERS WERE NOT ALLOWED TO SEE. NEVER HAPPENED BEFORE. MILLIONS OF MAIL-IN BALLOTS WERE SENT TO PEOPLE WHO NEVER ASKED FOR THEM!” Trump said in a tweet that Twitter quickly labeled as containing information about “election fraud that has been disputed.”

Sen. Kamala Harris of California, Biden's running mate and the first woman of color to be elected vice president, introduced the president-elect.

“When our very democracy was on the ballot in this election, the very soul of America at stake, and the world watching, you ushered in a new day for America,” said Harris, who wore all white, in a nod to the women who fought to give women the right to vote in the U.S. Vice President-elect Kamala Harris gets ready to address the nation in Wilmington, Del., on Saturday. (Andrew Harnik/Pool via AP)

Noting the impact that the coronavirus pandemic has had on the country, Harris thanked all the officials and volunteers who made sure the election went forward.

“To the poll workers and election officials across our country who have worked tirelessly to make sure that every vote is counted, our nation owes you a debt of gratitude. You have protected the integrity of our democracy,” Harris said.

In her history-making speech, Harris, the daughter of an Indian-American mother and a Jamaican father, drew on her own background, saying she was reflecting on the life of her mother, Shyamala Gopalan, who died of cancer in 2009.

“I am thinking about her and about the generations of women — Black women, Asian, white, Latina, Native American, who throughout our nations history have paved the way for this moment tonight,” Harris said.

The announcement that Biden had won the election set off mass celebrations in many of the heavily Democratic cities that Trump had spent weeks attacking on the campaign trail. Crowds numbering in the thousands gathered in Washington, D.C., New York, Portland, Seattle, San Francisco, Los Angeles, Denver, Atlanta, Chicago and Austin, among others. Smaller crowds of Trump supporters also assembled to show their support for the president, like those that greeted him as he left his Virginia golf course.

One woman, who said her name was Delaney, was waving a sign that said “KAMALA'S HOUSE,” noting that Biden's running mate is set to move in after the inauguration in January. “This is Kamala's house!” Delaney shouted.

Delaney said that she was in the same location as a young girl after the 2000 election and saw Republican protesters shouting at then Vice President Al Gore. That had motivated her, she said, to give Pence the same treatment. “I was 10 years old. I'll never forget it,” Delaney said. “This is vindication. Now we won.”

As the president's political foes basked in the realization that he had lost to Biden, Trump's lawyers, including former New York Mayor Rudy Giuliani, held a news conference Saturday outside a Philadelphia landscaping business. Trump himself announced the press conference on his Twitter feed, appearing to signal that it would be held at the prestigious Four Seasons Hotel.

Shortly thereafter, however, the hotel itself clarified that Trump's press conference would actually be held at Four Seasons Total Landscaping, a local nursery.

Giuliani lashed out at media organizations who had called the race for Biden.

“All the networks thought Biden was going to win by 10 percent. Gee, what happened? Come on, don't be ridiculous! Networks don't get to decide elections,” Giuliani said.

But the network projections showing Trump had lost were based on the number of votes that had been tallied for each candidate by officials in states nationwide. They showed Biden leading Trump by more than 4 million votes, but, more importantly, with victories in key battleground states that had given him a solid majority of votes in the Electoral College.

While Trump and his legal team say they are preparing to contest several states' election results in the courts, most observers consider that strategy quixotic, and leaders from around the world appeared ready to move on from Trump, sending their congratulations to Biden and Harris for their apparent victory.

“Congratulations President-elect @JoeBiden & @KamalaHarris on your victory in the US Presidential election,” New Zealand's Prime Minister Jacinda Ardern wrote on Twitter. “With so many issues facing the international community, your message of unity is one we share. New Zealand looks forward to working with you both!” Krista Matheny listens to Biden’s speech on Saturday in Times Square in New York City. (Andrew Kelly/Reuters)

German Chancellor Angela Merkel, whom Trump has frequently criticized, also said in a statement that she considered the U.S. presidential race to be over.

“I'm looking forward to the future collaboration with President Biden. Our transatlantic friendship is irreplaceable, if we want to overcome the great challenges of this time,” Merkel said.

President Volodymyr Zelensky of Ukraine said in a tweet that he believed Biden's election would yield an even stronger friendship between the two nations. It was a conversation with Zelensky in which Trump pressured him to investigate Biden and his family that sparked the impeachment proceedings brought against the president by House Democrats.

“Congratulations to @JoeBiden @KamalaHarris ! #Ukraine is optimistic about the future of the strategic partnership with the #UnitedStates ,” Zelensky wrote.

At home, just a handful of Republicans offered their public congratulations to Biden and Harris.

Other Republicans were more inclined to echo the current president than to give support to the man who had been elected to replace him.

In Wilmington on Saturday night, the coming legal challenges seemed little more than an afterthought for Biden and Harris, who basked in the moment of their victory over Trump.

“You delivered a clear message: You chose hope and unity, decency and science, and yes, truth. You chose Joe Biden as the next president of the United States of America,” Harris said, adding, “While I may be the first woman in this office, I won't be the last.”

“Too many dreams have been deferred for too long. We must make the promise of the country real for everybody,” Biden said in a speech that was marked by its aspirational tone.

“We stand again at an inflection point. We have the opportunity to defeat despair and to build a nation of prosperity and purpose,” he said. “We can do it. I know we can.”