The Smiling Kalisa Is Gone But He Has Left Us Lessons! 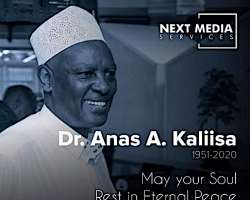 I hadn’t seen such a very handsome 70-year-old since the death of my grandfather, till when I started seeing Dr. Anas Kalisa on our televisions. At 70, our late grandfather, Hajji Kibirige(R.I.P), could go into one of the farmhouses, hold himself up on to one of the roofing wood pipes, and start stretching his back—that was his major exercise, apart from walking and cycling for a bit. He smiled most of the time except when he was asking you why you had missed prayers. He greeted residents such that if you’re carrying him on a bike for a journey that takes 15 minutes, it would take 30- 45 minutes, because that meant making stop overs to greet all kinds of people.

Most of these guys now in their 70s - 90s carried themselves in such a humble way compared to our generation, and Allah is taking them at a speed; Inna Lillahi wa inna illaihi Rajihuuna. We rarely smile and are very quick to respond with personal insults when someone does not agree with our generally very simplistic know-it-all notions.

I didn’t know the late Kalisa on a personal level, but he was always smiling while on TV. FYI- Smiling is sunnah in Islam and one gets rewards for it. My late father in law, too, used to smile every time I met him. Sheikh Kulumba (R.I.P), former Buganda speaker and our grand’s best friend, used to smile too, when greeting someone, at least the few times I met him. Hajji Abasi Kawase Mukasa, former headmaster Kibuli S.S, is always smiling and charming, and anybody (rich or power) can have a normal conversation with him.

The last video clip I watched of Dr. Kalisa, he was being hosted on Salaam TV talking about berets, and he was advising the NUP guys to use ‘topi’(cap) and stop aggravating the army. He was basically telling them to be humble and not fight something that wont benefit them at all.

Very smart people all too often are bullied or discriminated against or looked at as odd. Many may hide their brains in order not to be picked on or in order not to look like they're "making themselves look smart (i.e. better)" when in company with people who aren't as intellectual or as quick thinking. They try to humble themselves for the sake of fitting in. For instance, its important to participate in a WhatsApp family group even if you think you’re smarter than others. There are lots of lessons to learn from our elders and I hope Allah forgives the dead their shortcomings. Ameen.