Biden responds to Trump: 'No one is going to take our democracy away from 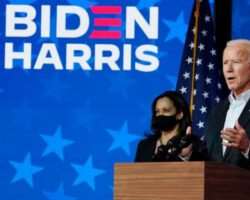 Minutes after President Trump held a press conference at the White House to make baseless claims about the election being stolen from him, Democratic presidential nominee Joe Biden tweeted that “no one is going to take our democracy away from us. Not now, not ever.”

The United States, he continued, “has come too far, fought too many battles, and endured too much to let this happen.”

Trump has been complaining about the election all day, demanding that votes be counted where he is behind and not counted in states where he is ahead. Biden delivered remarks in the afternoon, telling supporters although it is taking longer than many people would like to count all the ballots, “the process is working.” Democracy, he added, is “sometimes messy. It sometimes requires a little patience.”