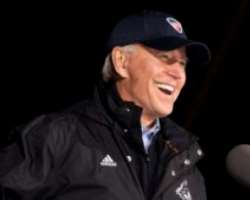 On the eve of what threatens to be the most contentious and potentially confusing Election Day in modern memory, Democratic presidential nominee Joe Biden retains a double-digit lead over President Trump in the final Yahoo News/YouGov poll of the 2020 campaign — a 10-point margin that's more than three times as large as Hillary Clinton's final polling advantage in 2016.

Yet most voters (51 percent) also expect Trump to refuse to concede if he loses the election — and more than three-quarters (77 percent) worry that violence will break out in the coming days.

On average, Biden leads Trump nationally by about 7 percentage points . Four years ago, Clinton led Trump by an average of 3.2 points right before the election. Clinton wound up winning the national popular vote by 2.1 points, 48.2 percent to 46.1 percent — even as a combined 77,000 votes in Michigan, Wisconsin and Pennsylvania put Trump over the top in the Electoral College.

Biden's lead in the Yahoo News/YouGov survey is slightly smaller than it was two weeks ago ( 11 points ) or one week ago ( 12 points) . Yet the Democrat's 10-point margin remains larger than it was in early October — and if it holds through Election Day, Biden would become the first candidate since Ronald Reagan in 1984 to win the presidency by double digits. Trump, meanwhile, would become the first incumbent since Herbert Hoover in 1932 to lose by 10 points or more.

That outcome is hardly assured. But given the size and stability of Biden's national lead, the scope of his competitiveness in key states and the staggering number of Americans who have already voted — more than 93 million as of Monday morning — it's too late for an October surprise to be a game changer by shaking up the news cycle. Instead, the president will secure a second term only if polls are underestimating his support by far more than in 2016 , when they missed by about 1 point nationally and about 4 points in Michigan, Wisconsin and Pennsylvania.

Another difference is that in YouGov's final 2016 survey, a full 14 percent of likely voters said they were either undecided or casting their ballots for third-party candidates; many of them broke for Trump at the last minute. Today that number is down to 4 percent. With fewer persuadable voters left to persuade, Trump is still mired in the low 40s — and Biden, unlike Clinton, is above the crucial 50-percent mark. The last Democrat to claim more than 53 percent of the popular vote was Lyndon B. Johnson in 1964.

Again, 1 in 10 isn't nothing; the president could still get reelected. But the poll makes it clear that Trump is facing much longer odds than last time around. Broad majorities of likely voters, for instance, say Biden would do a better job than Trump at handling the coronavirus pandemic (53 percent to 37 percent), health care (52 percent to 38 percent), race relations (54 percent to 35 percent) and the environment (55 percent to 31 percent). Narrow pluralities also pick Biden on the economy (46 percent to 45 percent) and crime (45 percent to 43 percent) — issues once thought to be Trump's strong suits.

One metric that doesn't necessarily favor Biden is enthusiasm. More Trump supporters (63 percent) than Biden supporters (56 percent) report being “extremely enthusiastic” about voting for president, though the gap narrows when those who say they're “very enthusiastic” are included (a combined 80 percent among Trump voters vs. 76 percent among Biden voters). Likewise, the two sides are equally invested in the outcome of the election, with 90 percent of Biden voters and 88 percent of Trump voters saying they “care a lot” about who wins — and 45 percent on each side saying the country “will never recover” if their preferred candidate loses.

With so much seemingly at stake — and with Trump reportedly eager to declare premature victory before all pandemic-induced mail ballots have been tallied — voters are increasingly anxious about how Election Day itself will play out. Just 22 percent of registered voters expect to know the winner on Tuesday night, and only slightly more (28 percent) still believe the election will be “free and fair.” Better than two-thirds, meanwhile, are either very or somewhat worried that “the outcome will not be accepted by one of the candidates” (71 percent) or that “legitimate mail ballots will not be counted” (69 percent).

“I think it's a terrible thing when states are allowed to tabulate ballots for a long period of time after the election is over,” Trump told reporters Sunday . “We're going to go in the night of — as soon as that election's over, we're going in with our lawyers.”

Yet the vast majority of voters oppose this approach. A full 71 percent, in fact, prefer to wait “for mail-in ballots to be counted so we are sure which candidate won, even if the process drags on for some time” — while just 29 percent would rather “determine the outcome of the election quickly, even if many mail-in ballots have not been counted.”

Only Trump's supporters disagree with counting every ballot. Most (57 percent) would rather determine the election “quickly,” and a plurality (44 percent) says Nov. 3 should be the deadline for a final result — which is perhaps why roughly half the electorate thinks Trump wants to make it harder to vote (49 percent) and harder to count every vote (48 percent).

But 63 percent of registered voters now say they trust their state to “accurately count all the votes in this year's election,” up from 46 percent in September — and a remarkable two-thirds of likely voters (66 percent) say they have already voted. Among them, Biden has a massive lead (63 percent to 34 percent), while Trump leads by nearly as much (60 percent to 34 percent) among likely voters who've yet to cast their ballots.

Whatever happens on Nov. 3, millions and millions of Americans will not take it lightly. The fears of Biden voters are especially pronounced, with 6 in 10 saying they'd be devastated (70 percent), depressed (64 percent), afraid (62 percent) or angry (62 percent) if Trump wins.

In other words: Buckle up, America. We could be in for some turbulence.

The Yahoo News survey was conducted by YouGov using a nationally representative sample of 1,501 registered U.S. voters interviewed online from Oct. 30 to Nov. 1. This sample was weighted according to gender, age, race and education based on the American Community Survey, conducted by the U.S. Bureau of the Census, as well as 2016 president vote, registration status, geographic region and news interest. Respondents were selected from YouGov's opt-in panel to be representative of all U.S registered voters. The margin of error is approximately 2.9 percent.