Now That The Nigerian Army Finally Admits "shooting" At Lekki...how Do You Kill Anthem-singing, Flag-waving Unarmed Youths And Give The Corpses Acid Treatment? 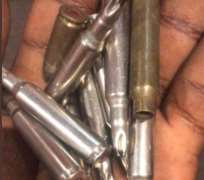 So unfortunate that sworn members of the Nigerian army would kill unarmed cream of Nigera's intelligentsia, waving the Nigerian flag, singing the national anthem merely protesting peacefully... after having sent thugs after them... to beat them...stab them...burn their cars in hundreds...

Even in a war situation, after having exchanged gunfire and hauled bombs at one another, waving of a white handkerchief by one side alone should suffice as a globally- accepted sign of SURRENDER!

The worst the victorious army can do is to take in the surrenders as PRISONERS OF WAR!

But in this horrible instance, we are not even talking about well trained soldiers matching up!

We are talking about a fully-kitted army who sneaked up on unarmed young brutalized youngsters, turned off all lights, and cameras, shot and killed these citizens at close range, then picked up the corpses for mutilation and acid treatment...

Just so to ensure that they covered up EVIDENCE!
I know Muhammadu Buhari has sons. He also has daughter. And he had a wife...Now deceased. She bore kids for him. Kids he has cherished since conception, as soon as wifey announced she was pregnant. Kids he cherishes enough to send them to foreign schools. And celebrate their weddings thereafter.

I also know for a fact that Buhari currently has another wife known as Aisha. She also bore sons and daughters for him. He also took pains to train them. We've seen husband and wife glow as they married off these children.

My medical background compels me to reason that corpses of protesters carted away from the site of massacre couldn't have been given "befitting" burials in individual graves.

They couldn't have been hauled into mass graves either...lest a belated discovery of such graves could lead to head counts, a forensic analysis and possibly a DNA and tracing to relatives.

They couldn't have been cremated either. Cumbersome! And cremation takes time.

The soldiers must have come to the massacre ground armed with electric saws, cut up the corpses into sizeable chunks in their trucks (to incrrase surface area) and poured concentrated sulphuric acid!