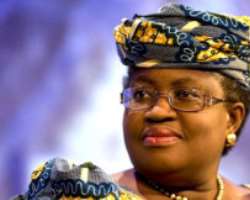 The Federal Government has said Nigeria will continue to engage relevant stakeholders to ensure the emergence of Dr Ngozi Okono-Iweala as the next Director-General of the World Trade Organisation (WTO).

The former Nigerian finance minister enjoys the support of 104 of the 164-member organisation and was coasting to a consensus choice before the United States blocked it.

As it stands, the US may force the WTO break out of tradition and resort to voting in a meeting scheduled for November 9, 2020.

A spokesperson for the Ministry of Foreign Affairs, Ferdinand Nwonye, in a statement on Thursday in Abuja, said the government would do all that is diplomatically possible to ensure remains the chosen for the position.

According to the statement, the third and final round of the selection process for the director-general of the global organisation was concluded on Tuesday and the result was formally announced the day after.

Nwonye said that Okonjo-Iweala had gotten the support of the majority of the member countries, but explained that she was yet to be declared and returned the winner because all the 164 member states of the organisation were expected to adopt the winner by consensus.

The WTO's bid to select a new leader was thrown into uncertainty following the rejection of the former minister by the United States.

But Okonjo-Iweala and Nigeria are hopeful as they await a meeting scheduled for November 9 for the final decision on the election process.

After weeks of consultation, three WTO ambassadors announced at a meeting in Geneva on Wednesday that Okonjo-Iweala had secured cross-regional backing in her bid to become the first African and female Director-General of the global trade organisation.

Read the full statement from the Ministry of Foreign Affairs below:

The Ministry of Foreign Affairs wishes to inform that the third and final round of the selection process of the Director-General of the World Trade Organization (WTO) was concluded on Tuesday, 27th October 2020 and the result was formally announced on Wednesday, 28th October 2020.

The candidate from Nigeria, Dr. Ngozi Okonjo-Iweala has secured the support of majority of the member countries but is yet to be declared and returned the winner.

This is because apart from winning the election, all the 164 Member States of WTO were expected to adopt the winner by consensus, in accordance with the rule of procedure of the WTO.

It is important to highlight that Dr. Okonjo-Iweala has secured cross-regional backing with only the United States opposing the consensus.

The Ministry wishes to further inform that a meeting of the General Council of the WTO has been scheduled for November 9, 2020, for the final decision on the election process.

Nigeria will continue to engage relevant stakeholders to ensure that the lofty aspiration of her candidate to lead the World Trade Organization is realised.