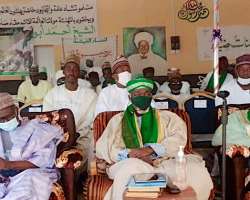 As Muslim Community mark Eid el Maulud Nabiyyi (SAW) across the world , Sheikh Khalifah Aliyu Abulfatahi has appealed to the Federal Government as a matter of great importance to address the teething problems of poverty biting hard on the livelihood of the large majority of the poor masses of this country.

Sheikh Abdulfatahi made the plea Thursday at the 2020 Eid el Maulud festival held at Madinatul, Old Maiduguri. While addressing the mammoth crowd that converged from far and near despite the security challenges from Boko Haram Insurgents at the Madinatul Jummaat Mosque, venue of the Maulud, the cleric prayed for all.

The participants include Muslim faithfuls from neighbouring countries of Sudan, Senegal, Ghana, Mali, Morrocco, Mauritania, Benin, Niger, Chad and Cameroon Republic's as well as neighbouring states of the country to witness the annual Maulud Nabiyyi (SAW) festival that Sheikh Ahmadu Aliyu Abulfatahi Foundation organizes every year since to mark the birthday of Holy Prophet Muhammadu SAW.

He said the significance of the Maulud Nabiyyi was to celebrate the unique birth of the Messenger of God (SAW) and remember his struggles, efforts, sacrifices and propagation of Islam as well as the successes recorded so far especially on how Islam is widely accepted as a religion of peace and unity, expanded and developed the Muslim community world wide.

Sheikh Aliyu further prayed for peace, unity and stability of the country particularly, quick return of peace and harmony back to Borno state and northeast as well as the country.

He also urged the Nigerian leaders to continue to be honest, have the fear of God in their dealings and carry their subjects along by way of providing for the less privileged in the society.

According to him, "assisting the needy or providing succour to the poor or less privileged in the society is very rewarding and God is always with those who help others, especially, the poor".

Khalifah also called on the Muslims to emulate the virtues of the Holy Prophet Muhammad (SAW) and his caliphates as well as his Decendents while appreciating the sacrifces and efforts of his late father who started and established the annual Maulud Nabiyyi (SAW) in the interest of the people and with good intention.

Khalifah noted also that after the death of his father, late Sheikh Alhamdu Aliyu Abulfatahi, Maulud has continued to be observed and become increasingly acceptable by Muslim faithfuls compared to the past due to the importance of Maulud in Islam and to every Muslim beleiver.

He prayed for good Heath of Nigerians and quick economic recovery of the country while acknowledging the contributions and support of individuals and organizations both home and abroad including the traditional rulers and top government functionaries who have been supportive in organizing the annual Maulud Nabiyyi (SAW) festival in Maiduguri by the Abulfatahi Education Foundation.

The Chief Host and convener also thanked everybody that converged at the Eid Maulud ground and wished all and sundry safe journey back to their destinations including those from Sudan, Mali, Central Africa, Niger, Chad and Cameroon Republic among others