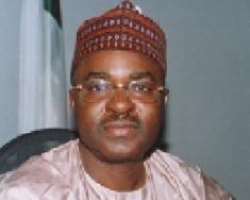 “Upon this motion exparte dated and filled on the 17th day of May, 2010 coming before this Honorable Court; upon reading the affidavit in support of motion ex-parte deposed to by U. B. Darazo [Esq.], male, adult, muslim, Nigerian citizen of No. 12 Ahmadu Bello Way, Bauchi on the 17th day of May, 2010 at the Federal High Court Registry, 17th day of May 2010; and after hearing P. A. Daffin Esq., of counsel for the judgment creditor/applicant move in terms of the motion paper; it is hereby ordered as follows:- That all the monies due or accruing in the judgment debtors account with the garnishes and/or monies which shall future accrue to the judgment debtors but in the custody and power of the garnishes to disburse as is sufficient to satisfy the judgment in Suit No. BA/226/2009 entered in favor of the judgment creditor/applicant on the 2nd day of February 2010 in the total of N561,164,556.71`plus N50,000 cost” – ordered presiding Judge J. N. Auta of the Federal High Court Holden at Abuja under Suit Number FHC/ABJ/CS/344/2010 in a suit brought by Puritano Limited against the government of Bauchi State and others.

The order in effect garnished all monies belonging to Bauchi State government in all banks within Nigeria, in particular it garnished 5 of Bauchi State accounts domiciled at the FIN Bank PLC namely:

The Bauchi State Government and its Governor find themselves grappling through the maladies of corruption and greed as it battles through endless and self inflicted obstacles – partly stemming from the ongoing battle between the former Governor of Bauchi [Mu'azu] and the present governor [Yuguda]. Governor Isa Yuguda in his battle stance against the former governor decided to not honor all contractual agreements or payments agreed upon by the previous administration.

Puritan Nigeria Limited, an electrical company who had performed rural electrification contractual work for the Bauchi State Government during the Mu'azu administration appears at the receiving end of the battle. Yuguda, as ukpakareports.com can confirm through court documents, stopped all payments due to the company even at the receipt of certificate of no objection. The contract was valued for N561million [N561,164,556.71] and a valid certificate of completion was issued upon completion.

Rather than remit payment to the company the governor of Bauchi resorted to “intimidation and harassment” of the principal operators of the company. The governor used the police commissioner of Bauchi State in togetherness with the other security agencies to chase the Chief Executive Officer [CEO], Chief Eddie Brown out of Bauchi State. Responding to the persistent attacks by the government, the CEO sought an order of restraint from the Federal High Court Holden in Abuja. On May 28th 2010, an interim order of injunction was given by Justice H. T. Soba under Suit Number FHC/ABJ/CS/359/2010. It reads, “that an order of interim injunction restraining the respondents either by themselves, servants, agents, functionaries or whomsoever from arresting, detaining, harassing, intimidating or in any other way interfering with the applicant's fundamental rights to dignify of person, person liberty, freedom of movement and right to property in relation to simple contract performed and/or executed, by the applicants pending the determination of the motion on notice is hereby granted”.